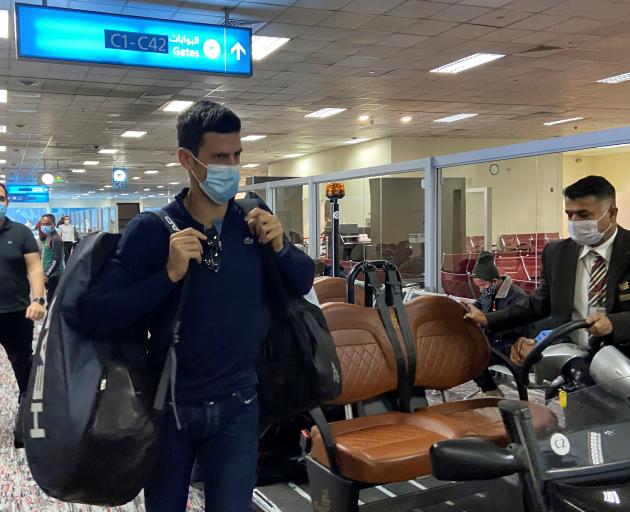 An unvaccinated Novak Djokovic at Dubai Airport on Monday after a federal court upheld the Australian government's decision to cancel his visa to play in the Australian Open. Photo: Reuters
Novak Djokovic risks being frozen out of tennis as he chases a record 21st Grand Slam title, with rules on travellers who are unvaccinated against Covid-19 tightening in the third year of the pandemic and some tournaments reconsidering exemptions.

The Serbian, who has not been vaccinated, was deported from Australia on Sunday ahead of the Australian Open after losing a court case to have the cancellation of his visa overturned.

Australian Immigration Minister Alex Hawke had said Djokovic could be a threat to public order because his presence would encourage anti-vaccination sentiment.

His case has stoked a global debate over the rights to decline vaccination as authorities around the world push that as the main route out of the two-year-old pandemic that has killed 5.5 million people.

The 34-year-old arrived home to a rapturous welcome. Most Australians had wanted him gone, but Serbian fans cheered and waved national flags as Djokovic touched down at Belgrade airport then headed to his own apartment.

"You are our champion, Novak!" and "We love you, Nole!" they chanted, using an affectionate diminutive.

Under Australian law, Djokovic cannot get another visa for three years - denying him the chance to add to his nine titles at Melbourne Park - but the government has left the door open for a possible return next year.

The world No 1, however, faces more immediate hurdles in his bid to overtake Swiss Roger Federer and Spaniard Rafa Nadal, with whom he is tied on 20 major titles, as he could be barred from the French Open as things stand.

The French Sports Ministry said on Monday there would be no exemption from a new vaccine pass law approved on Sunday, which requires people to have vaccination certificates to enter public places such as restaurants, cafes and cinemas.

"This will apply to everyone who is a spectator or a professional sportsperson. And this until further notice," the ministry said.

"As far as Roland Garros is concerned, it's in May. The situation may change between now and then and we hope it'll be more favourable. So we'll see - but clearly there's no exemption."

The ministry's stance was welcomed by Germany's world No 3 Alexander Zverev.

"At least it's clear what's going to happen," he told reporters after winning his opening match at Melbourne Park on Monday. "At least they're saying, 'OK, no unvaccinated players are allowed to play in the French Open.'

"We know that now in advance, and I can imagine there's not going to be any exemptions, and that's OK."

The next tournament on Djokovic's calendar is likely to be the Dubai Duty Free Tennis Championships from February 21-26.

A spokesperson for the event told Reuters that all players would need to provide negative PCR tests before being allowed into the United Arab Emirates.

"(Players) will then need to adhere to the testing protocols and processes stipulated by the ATP and the WTA," the spokesperson added.

Organisers of the Monte Carlo Masters, which Djokovic has won twice, are awaiting French government guidelines for the next edition in April, while Wimbledon organisers AELTC are also yet to finalise safety arrangements for the major.

However, England's Lawn Tennis Association said entry requirements for its events, some of which serve as Wimbledon warm-ups, would be determined by the government.

Currently, unvaccinated people can enter England but must isolate for 10 days.

Djokovic could have trouble even getting into the United States, because foreign air travellers have had to be fully vaccinated since November last year and provide proof before boarding flights, with limited exceptions.

The US Centers for Disease Control and Prevention has said there are no exceptions for vaccine requirements "for religious reasons or other moral convictions."

That rule could also impact Djokovic's participation in US hardcourt tournaments at Indian Wells and Miami in March.

The Serbian, who is among three ATP players in the top 100 yet to be vaccinated, could also face issues ahead of the Italian Open in Rome in May due to tough anti-Covid restrictions in Italy.

Madrid Mayor Jose Luis Martinez-Almeida told La Sexta TV station on Monday that it would "be great" to have Djokovic play in the April 26-May 8 Madrid Open, which he has won three times, though the government would be the arbiter.

Spain requires visitors to prove they have been vaccinated, had a recent negative test, or have immunity based on recovery.

Djokovic travels regularly to Spain where he owns a house in the southern resort of Marbella. He spent a few days in late December and early January and video footage showed him training there.

Spanish rules currently require people to have either a vaccine certificate, a PCR negative test or a certificate of having recovered from Covid. The country imposes strict quarantines on people who test positive.

German Chancellor Olaf Scholz insisted the different rules in the different countries must be respected. "We all have to abide by them, no matter who we are."

French apparel brand Lacoste, a sponsor of Djokovic, said on Monday it would contact him review events in Australia.

"As soon as possible, we will be in touch with Novak Djokovic to review the events that have accompanied his presence in Australia," Lacoste said in an emailed statement.