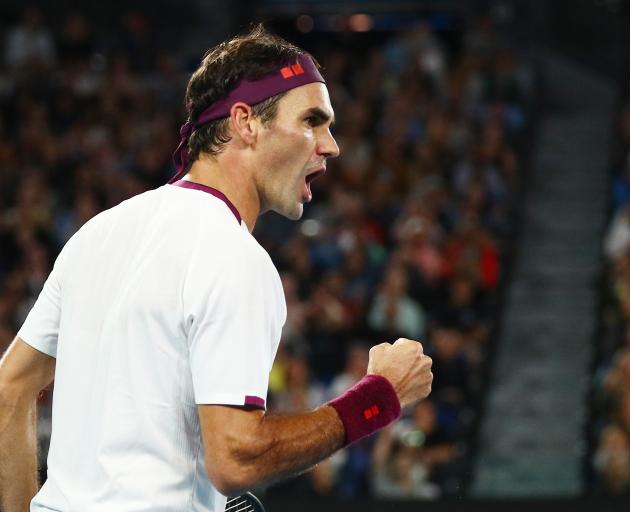 Roger Federer had a slow start but recovered to win a four-set match on Sunday. Photo: Reuters
Defending champion Novak Djokovic reached his 11th Australian Open quarter-final with a 6-3 6-4 6-4 victory over Argentine Diego Schwartzman on Sunday, while Roger Federer continued his smooth progress.

Djokovic, a seven-time champion, is again the man to beat in Melbourne after claiming another comfortable victory, which included 38 winners, and will meet big-serving Canadian Milos Raonic for a place in the final four.

The Swiss will next face American Tennys Sandgren for the first time in his career.

"He was not going to be a baseball player, that's for sure," Federer said of his quarter-final opponent. "Played a lot of tennis in my life, but never against Tennys."

Canadian Milos Raonic sent down 35 aces as he blasted past Marin Cilic 6-4 6-3 7-5 in a meeting of two players who both reached a career-high ranking of number three but have since dropped out of the top 30.

In the women's draw, top seed and home favourite Ash Barty survived a scare to beat American Alison Riske 6-3 1-6 6-4 and set up a repeat of last year's quarter-final against seventh seed Petra Kvitova.

"I love Petra but let's hope she doesn't break my heart on Tuesday," said Barty of the Czech, who beat the Australian at the same stage last year.

Kvitova lost a tight opening set to Greek Maria Sakkari but the 2019 runner-up recovered to win 6-7(4) 6-3 6-2 and reach the quarter-finals.

"I just kept playing. I knew it would be a really difficult match... I had to fight hard... my serving game really helped," Kvitova said.

However, it was the end of the road for teenage sensation Coco Gauff as she fell to fellow American Sofia Kenin 6-7(5) 6-3 6-0.