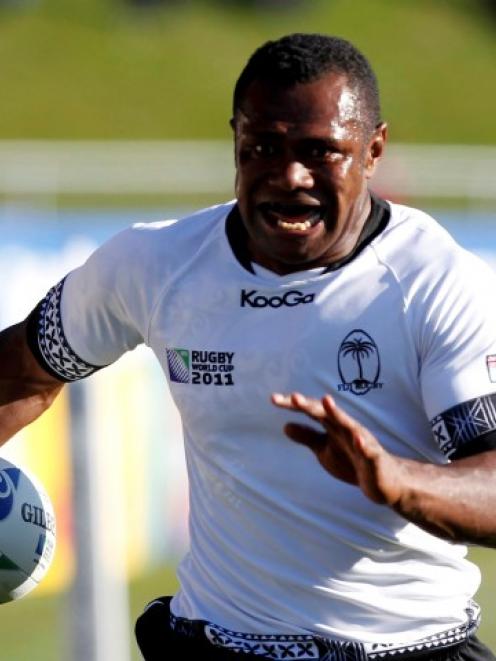 Fiji, including Vereniki Goneva, seen here playing against Namibia in Rotorua on Saturday, are regarded by South Africa as a threat to the Springboks' World Cup chances. Photo: REUTERS/Bogdan Cristel
While his teammates and coaches have said the past counts for nothing at this rugby World Cup, South Africa prop Gurthro Steenkamp has gently reminded his fellow Springboks of the potential banana skin they face against Fiji on Saturday.

"Definitely not to underestimate them (and) play to the last minute. Definitely," Steenkamp told reporters in Wellington on Tuesday when asked what they should expect from the Pacific islanders in their Pool D clash.

Steenkamp knows full well the impact the Fijians can have on a tournament.

He was a replacement in the 2007 World Cup quarter-final against Fiji in Marseille, when the Springboks appeared shell-shocked after the Islanders drew level at 20-20 with 20 minutes to go after they had scored two tries within three minutes.

The Fijians almost had a third try when Ifereimi Rawaqa crashed over in the left corner only to put his foot into touch after a smothering tackle from JP Pietersen.

Captain John Smit said after that game he had been concerned his team may panic and it was imperative they held their composure.

"I told the guys to remember the look in the eyes of the Aussies and the Kiwis and said I didn't want to see that here," he said in 2007 in reference to the Wallabies and All Blacks both being surprisingly knocked out in the quarter-finals the previous day.

The rallying cry worked, with the Springboks going back ahead with a Percy Montgomery penalty and then two late tries to flanker Juan Smith and flyhalf Butch James that helped them to a 37-20 victory.

The Springboks went on to lift the Webb Ellis trophy.

That kind of composure was again evident last Sunday when the Springboks overhauled a 16-10 deficit against Wales in their opening match and Steenkamp said the team's pre-tournament nerves had all been worked out in that match.

"It was a massive buildup. It was definitely a lot of excitement and now the first game is in the back pocket the guys are more at ease," he said.

"The focus has now shifted on to the second game. We will be focusing on Fiji and what we can do in that game.

"The Fijians... they're very passionate guys and they will bring everything to that game."

The Springboks, who won their opening match 17-16 despite having very little ball and being camped defending in their own half for most of the game, have been criticised for their performance and for not beating Wales by more points.

Springboks hooker Bismarck du Plessis, however, said it does not matter how they win games, as long as they win.

"After the World Cup, you're not going to care that you won the first game by one point. All you want is to win seven games in a row."