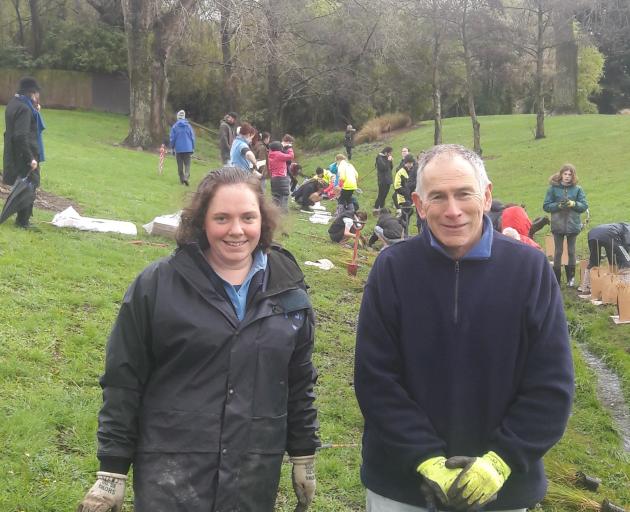 Stream beautification and bank protection was the goal for 63 guides from GirlGuiding New Zealand who donned robust footwear and took up spades in Crosbie Park to plant native plants along the stream’s banks and carry out a general tidy-up of the area.

The riparian planting event was a combined initiative involving stream group, Network of the Ilam Stream, girl guides and the city council.

The event’s success would not have been possible without the enthusiastic and generous support of the city council.

Fendalton-Waimairi-Harewood Community Board chairman Sam MacDonald initially brought the two groups together and the assistance of the city council's parks and gardens team who supplied all of the plants, tools and refreshments.

The event was attended by Mr MacDonald and board member Shirish Paranjape.

The botanic expertise was provided by Matthew Arat and his team, who gave up part of their weekend to assist and ensured the event went without a hitch.

City council head of partnerships Kate Russel said: "We are so delighted to be working alongside the girl guides of all ages to help to make Crosbie Park an even better community space. "

She said the city council's programme of engagement with young people through schools and groups such as GirlGuiding NZ is creating a new generation of parks’ guardians to look after the city’s precious greenspaces into the future.

The rejuvenated Ilam Stream flows from the top of Avonhead Park through the Avonhead suburb before joining up with the Avon River in the grounds of Canterbury University's Ilam Gardens.

The stream was the 1980s dream of the late Tony Royds, a long-time Avonhead resident.

This planting event is a further step in progressing the stream from its previous ditch-like state into a restful focal point for residents to enjoy with its now flowing water and plantings that are supportive of both ongoing bird and aquatic life.

A sign of the Ilam Stream’s progress is that this year is the first-year residents have been reporting the greater presence of native birds in the steam environs.