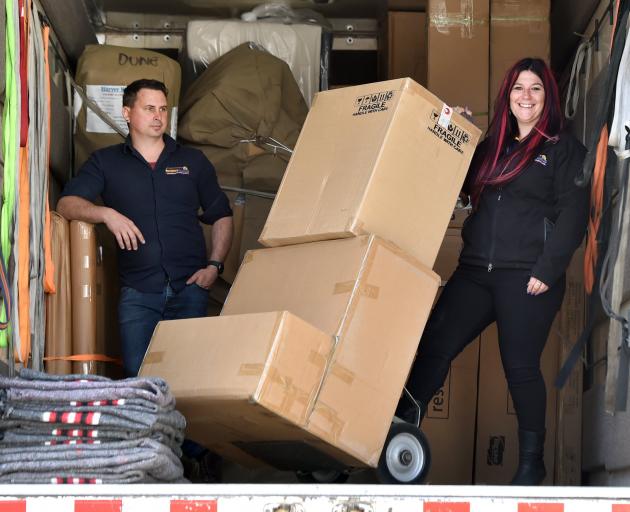 Southern Furniture Movers owner and managing director Teressa Grigg and general manager Simon Holliday in one of the company’s moving trucks.PHOTO: PETER MCINTOSH
It was a big year for Southern Furniture Movers,  revenue rising as much as 70% on last year and demand for its services up. The company’s managing director, Teressa Grigg,  tells business reporter Jacob McSweeny about how it all started with a baby and $4000 in the bank.

Teressa Grigg knows you’ve got to take the opportunities when they come.

Now at the wheel of Southern Furniture Movers - which won the excellence in distribution and logistics section at the recent Westpac Otago Business Awards - Ms Grigg has come a long way in the past 10 years.

Back then her husband at the time was working for a Canterbury logistics company, running its Dunedin branch, Ms Grigg said.

After he had run it for about 18 months he was made redundant, but the company offered him a truck for $4000.

She had just given birth to their daughter and the idea of starting a new business was daunting.

"A 5-day-old baby - it’s not something you want to be dealing with, but you do what you’ve got to do."

They picked up the truck and that company’s contracts for work around Dunedin - including carrying product for Harvey Norman.

"About six weeks later we had an old colleague ... he had an accident and couldn’t run his trucks anymore," Ms Grigg said.

The colleague’s family offered to sell the trucks to her and her husband, and so they took them on.

"We went from having one truck and one staff member to having four trucks and five staff within the first six weeks," she said.

"It was pretty intense."

It was not long before they had to buy another truck as more customers jumped on board.

Southern Furniture Movers soon bought its first line-haul truck, "which is one of the big ones", Ms Grigg said.

That meant in the first year of business the moving company went from reluctantly buying one moving truck to having six trucks.

"It was pretty full on," Ms Grigg said.

In 2012 one of their clients — major retailer Big Save Furniture - asked Southern Furniture Movers to go to Christchurch and the company duly opened an office there.

For six years the company covered the South Island - along with a few trips to Wellington to drop products off.

In 2017 they made the big jump to opening in Auckland to get a contract with a big importing customer, Ms Grigg said.

For her as a southern woman, it was an eye-opener, Ms Grigg said.

"That was awful. It was high pressure - it’s a different world up there. We had to adjust so many things just in the way we did business.

"They don’t do handshake business like they do down here. You’ve got to be a bit more corporate, I guess, to work up there."

By this stage the company’s trucks had swelled to 10.

Later in 2017 she split from her partner and by March 2019 she had bought him out of the business.

"It was a big step. A woman in transport? It’s not a normal thing for the owner to be a woman — there’s normally a husband around the place."

Because of the growth of the company it was hard to sell, meaning if she did not buy out her ex-husband the business would likely shut down.

"I was too proud for that," she said.

Since that point it has been a story of growth.

"It’s been insane - I’ve put three new trucks on the road and one second-hand one."

"You’ve got to take the opportunities when they come," she said.

"There’s been a couple [of contracts] that we’ve turned down just because we would have failed. I’m not one to take on something that I know I won’t be able to achieve properly."

She now wanted to consolidate the company’s growth, she said. Its revenue was up between 60% and 70% on last year.

"We need a bit of consolidation time to make sure we’re getting everything right."

Southern Furniture Movers now has most of the big furniture companies on its books and sticks to moving their products rather than moving houses.

Its clients include McKenzie & Willis, Big Save, Harvey Norman and My Mate John’s.

When it won the excellence in distribution and logistics award at the Westpac Otago Business Awards last month it beat out international players Mainfreight and DHL.

"I still think about it and go ‘wow’. I was pretty blown away," Ms Grigg said.

She had not prepared a victory speech but luckily her general manager, Simon Holliday, had.

"Simon said to me ‘so have you prepared a speech?’

The award was acknowledgement of all the hard work her team did, Ms Grigg said.

"To have the recognition was pretty special — it was really cool."

THE key to being a good logistics company in the present day was having good systems, staff who were engaged and being real with customers, Ms Grigg said.

"If you make a mistake, put your hand up," she said.

"How you deal with it when you make a mistake makes a big difference. We’re all human. It happens but we just try keep it to a minimum and good systems help with that."

Many of the staff enjoyed the fitness that came with moving big pieces of furniture every day, but it could be challenging to keep everyone happy, she said.

"We have a big family here. I drive that pretty hard in making sure my team are all happy in their work.

"[I] don’t always get it right, but you’ve definitely got to try."

Container delays had been a challenge her company had been at the sharp end of lately, she said. Many of Southern Furniture Mover’s clients had presold containers full of products, Ms Grigg said.

"They’re all kind of wanting it out before Christmas and we don’t have the container, so we can’t send it out.

"Some of them, they can’t even tell us when the container’s coming in. They actually don’t know."

One of the consequences of the delays had been that instead of having products shipped in containers from Auckland to Christchurch they were going on the roads - meaning a lot more demand for trucking.

"Normally, we would run our semi-unit once a week. Currently, we’re running it two to three times a week."

It meant the company had to perform a juggling act with its schedule so its big truck could go down to the South Island.

She expected the demand on transport companies to continue to ramp up.

"January’s normally a quiet month because all the suppliers shut down. A good chunk of them aren’t shutting down this year. They are keeping on working through."

From her position running a transport company, the economy was booming.

"Everybody I know, in our game or not, is so busy.

"It’s insane. My customers would say the same thing - they’ve never been so busy."

Her goal in the next year was to get more trucks.

"They’re not easy to find. You’ve got to build them and the build time takes ages."

She was hoping to get something imported rather than built, because that took so much less time.