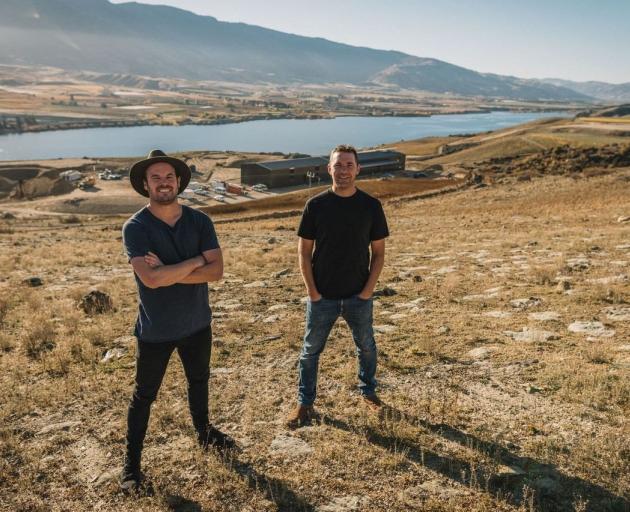 Scapegrace Distilling Company founders Mark Neal (left) and Daniel Mclaughlin stand on the hillside above Lake Dunstan, near Tarras, in front of their new $25million distillery. PHOTO: SUPPLIED
A $25 million distillery, expected to be the largest in New Zealand, is being built in the South Island.

The Scapegrace Distilling Company distillery will have two buildings set on 36ha with views of Mt Pisa and Lake Dunstan. Scapegrace’s spirits were being made at a distillery in Canterbury, using a 19th century copper pot still.

Construction work on the first building containing a new head office, bottling hall, warehouse and first barrel room has begun and is due for completion by August.

The buildings will be 4500sq m and are expected to be open to the public from November 2023. The distillery has received support from both the Cromwell Community Board and Central Otago District Council.

"Scapegrace Distilling Company will bring an exciting new offering to Central Otago for residents and visitors alike — that has to be a good thing.

"It promises increased job opportunities, the engagement of local contractors, and another string in the bow of what our district has to offer," he said.

Scapegrace marketing director and co-founder Mark Neal said a priority in the construction plans has been sustainability.

"We made the decision early on to create a world-leading distillery with sustainability at the forefront, so together with the experts at Cheshire [the architects] we have factored that into every decision we’ve made," he said.

While mapping carbon footprints, the decision was made to switch from traditional fossil fuel boilers to electrode boilers.

"Each decision is an incremental step forward in our quest to eventually become carbon neutral and create a property that enhances the region," Mr Neal said.

Scapegrace is planning a regenerative planting programme on site with $150,000 worth of native kanuka.