‘We were just waiting for this happen’: Suspicious fire confirms  residents’ concerns

People living near an abandoned 1920s-era, two-storey Christchurch house are not surprised it burned down on Wednesday.

Firefighters were called to the blaze opposite St Barnabas Church on Fendalton Rd at 2am yesterday. The house was destroyed.

St Barnabas Church caretaker Greg Brown said: “The house was stripped, there was absolutely nothing in it. I have seen many people and kids wondering through, people would even have parties there. Over the weekend, I noticed more graffiti on the fence outside.

“We were just waiting for this to happen. The house and grounds weren’t looked after,” he said.

Another nearby resident who would only be referred to as Colin said: “There were smoke and embers everywhere. It was a real sight. People have been coming and going in the house over the years, it’s no wonder there was a fire.”

Six fire crews and a command unit attended the blaze. A neighbouring property was evacuated. The occupants were allowed to return home just before 4am. 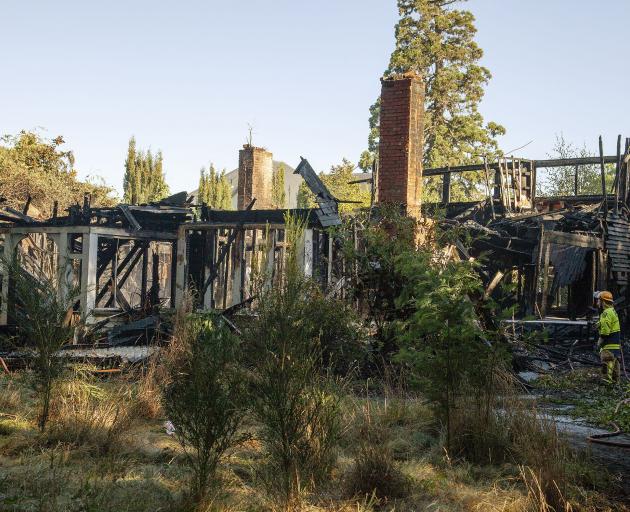 The remians of the house on Fendalton Rd. Photo: Geoff Sloan
The fire was extinguished by about 7am and crews were still on site in the morning, keeping hot spots damp.

It was the second suspicious house fire in Christchurch this week.

On Sunday, a lived-in 105-year-old house on Park Tce was badly damaged. A 40-year-old-man has appeared in court charged with arson. He has been remanded in custody until February 11 and has interim name suppression.

No one was believed to be inside the building at the time.

Gina Smith who lived nearby said the house had been empty for many years. Trespassers frequently visited the house. It stood next to two other abandoned homes.

Another local resident, known only as Ann, visited the house on Monday looking for her missing cat.

“It was once such a beautiful house but now everything, including the lovely wooden doors have been stripped and taken,” she said.

Ann said all the windows upstairs were smashed and the hot water cylinder was on the ground with all the copper stolen.

She could see traces of where people had been squatting.

“Why hadn’t people come to clear the section or block the entrances and windows like the house next door?”

The six-bedroom house was built by England Brothers that designed many large homes in Christchurch in that era, including the final stages of Riccarton House. Pre-earthquake, it featured a swimming pool and tennis court but the grounds are now overrun with long grass and weeds.

“It was only just last week that I thought to myself: ‘I hope it doesn’t burn down.’”

The owners of the Fendalton property did not want to comment.