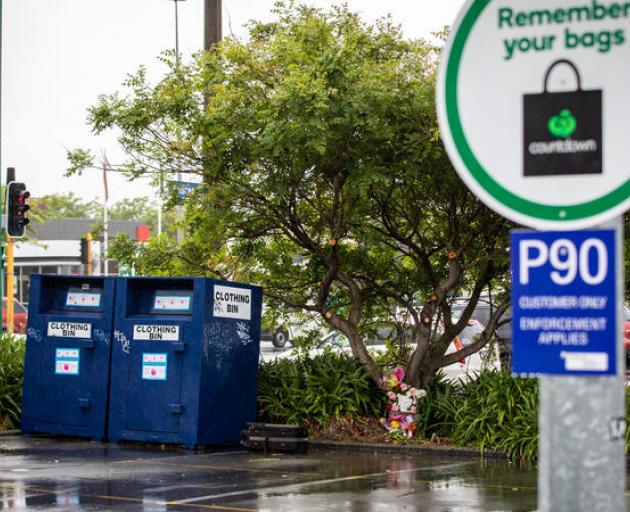 Flowers for the teen who died over the weekend, left among plants at the edge of a car park. Photo: RNZ / Nate McKinnon
Christchurch is dealing with the death of yet another teenager, the latest involving an 18-year-old who the police say was attacked by a male aged just 16.

It follows the shooting dead of 16-year-old Connor Whitehead just last month, and the fatal stabbing of another 16-year-old, Zion Purukamu, at a party in Fendalton in August.

RNZ sought some expert advice for the parents of teens, anxious to know how they could keep their children and their friends safe on the weekend.

Christchurch's 298 Youth Health centre senior medical officer ]Dr Sue Bagshaw said as tragic as the deaths were, it was important parents remember these sorts of incidents are still rare.

"But having said that, we really ... need to tone down.

"The whole of our society is over the top at the moment and I'm sure part of that is Covid and lockdowns and restrictions and most importantly uncertainty.

"And, therefore, I think what we can give our young people as much certainty as we are able," Bagshaw said.

A lot of the harm she saw in her clinic involved alcohol, and she wanted to see a societal shift in the way it was viewed so that teenagers did not see binge drinking as a right of passage.

The example set by parents was an important place to start, she said.

"We keep saying 'don't do as I do, do as I say to you', but actually we copy what parents do, and so yes it's a great responsibility on parents."

But teenagers were actually drinking less now than when their parents were their age, Bagshaw said.

"This is according to the Youth 2000 study which is a random sample of all high school students in New Zealand, in 2001 the amount of alcohol used between 2001 and 2019 has halved."

Parenting Place charity offers courses and advice for those trying to raise a family.

It was important to remember that taking risks was an important part of being a teenager, she said.

"And so perhaps instead of organising a party with alcohol, perhaps we can organise other things for them to do like jumping off a wharf or doing rock climbing or you know things that still give you the sense of excitement and adrenaline rush, but are not actually risky."

Parents worried about their children when they were out on the town should come up with a code word or an emoji for when they were in trouble, she said.

"So if you can set up with your teenager in advance the idea that I'm your parent who loves you, your safety is so important to me.

"I want you to be able to call me or text me this emoji whenever you need it and I will come pick you up, and make sure you're safe."

Flowers have been left at the scene of the latest attack, but the name of the teenager has yet to be released.

As the case is before the courts, police declined to be interviewed for this story.

However, in a written statement, Canterbury metro area commander superintendent Lane Todd said "the tragic deaths this year of three young people under these circumstances was devastating for our community".

Their thoughts were with the families and friends affected by their loss, Todd said.

Overall the number of homicides is down so far this in 2021 compared to last year.

This year to the end of October there were 148.