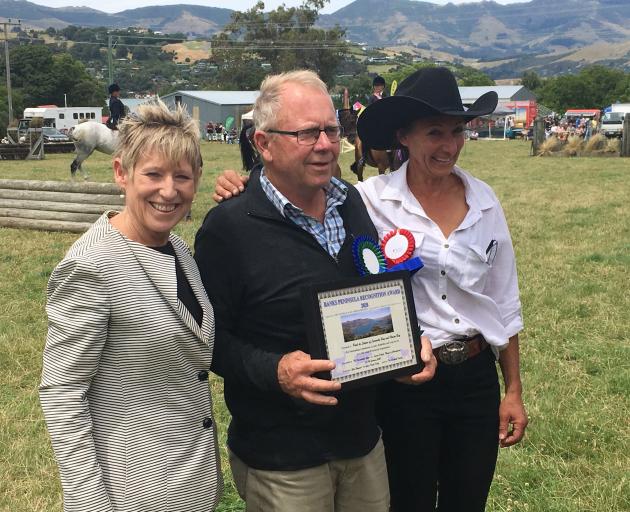 ‘‘It was a surprise. I thought when [show president] Tania [Kiely] rang me she was ringing to talk about doing the announcing,’’ he said.

Mr de Latour and his wife Frances were once again at the show, in the announcer’s box where they have served for more than a decade.

Over the years Mr de Latour has been an exhibitor, volunteer, committee member, show president in 1981 and then supervising marshal in the jumping ring for 21 years until 2005.

‘‘I rode in the show when I was a kid. In those days you had to ride to the show to compete and then ride back afterwards.

‘‘The show brings the peninsula together and the same people have been doing it for years.

‘‘Families have been coming here for generations. They are a breed who understand the enjoyment of showing and just competing.’’

The de Latours farmed 1115ha at Lavericks Bay on Banks Peninsula, farming up to 4500 sheep and 950 head of cattle.

On February 22, 2011, the day of the Christchurch earthquake, the de Latours downsized, moving to the 148ha Lynhurst farm at Okains Bay, where they breed 200 Angus and Angus-cross cattle.

The couple’s daughter and son-in-law, Harriet and Lloyd Chapman, have taken over the Lavericks Bay farm.

‘‘My son-in-law is a far better farmer than I am, so we were quite lucky,’’ Mr de Latour said.

‘‘He left his own family farm to come here, so it meant we didn’t have to make a decision.

‘‘It takes determination, tolerance and resilience. It’s not easy farming on the peninsula. We’ve been through droughts and snow and earthquakes is a new one for us.’’

He has also chaired the Banks Peninsula Pest and Weed Liaison Committee and is a member of the Canterbury Tb Free/Nait Committee, among other organisations.

This Saturday Mr de Latour will be on gate duty at the Banks Peninsula A&P Show at Little River, as part of the Akaroa and Bays Lions contingent.