The Goughs Bay ‘Haley fence’ project. Photo: ECan
Two forested stream gullies on a sheep and beef farm on Banks Peninsula will be fenced off to protect water quality and biodiversity.

The Goughs Bay ‘Haley fence’ project will receive more than $15,000 of Immediate Steps biodiversity funding over the next two years to exclude stock, improve water quality and instream habitat, and allow native forest to regenerate.

Christchurch City Council’s Biodiversity Fund has also contributed more than $17,000 towards this project.

“Projects like this highlight the collective effort that’s going on to improve the waterways and biodiversity values in our zone.”

Landowner Marie Haley is looking to regenerate the farming operation and find natural systems to “take some of the hard work out of farming.”

The project will complete the fencing of all streams on the property.

“For me, this brings about a lifelong goal of fencing the bush on both sides of the main homestead, blocks of bush that I played in as a child and then built my ecological skills within,” she said.

“Once I realised how degraded the understory was by grazing, I wanted to protect them to see them fulfil their fullest abundance and beauty.” 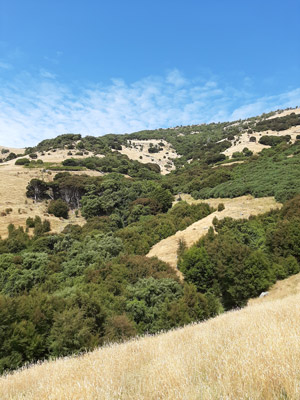 The Haley fence 'back' block will be fenced first. Photo: ECan
The gullies provide habitat for several at risk or declining native species, which will be further enhanced by fencing them off to allow the understory to regenerate.

The gullies are upstream of significant mahinga kai sites and already support a diverse range of native species – birds, invertebrates, and lizards, with several bully species, kōaro and banded kōkopu.

The regenerating native plant species – mataī, tōtara, and others – will provide essential habitat for this life within the gullies.

“Already without the fencing being completed I am heartened by the spread of tomtit, falcon and morepork, a spill over effect of Hinewai Reserve.

"Just the other day a tomtit came into my garden and landed right by my feet, it felt like a blessing of the forest protection I am doing for them," she said.

Ongoing weed control is carried out by Marie but is not a major issue, and the fence will help reduce sediment entering the stream, increasing water quality, instream habitat and more.

Marie also runs tours showcasing the protection of biodiversity on her property - making the work she is undertaking visible and accessible to the public.

In future, she is exploring options to covenant the area, legally protecting the land so that all current and future landowners must manage the land for conservation purposes.