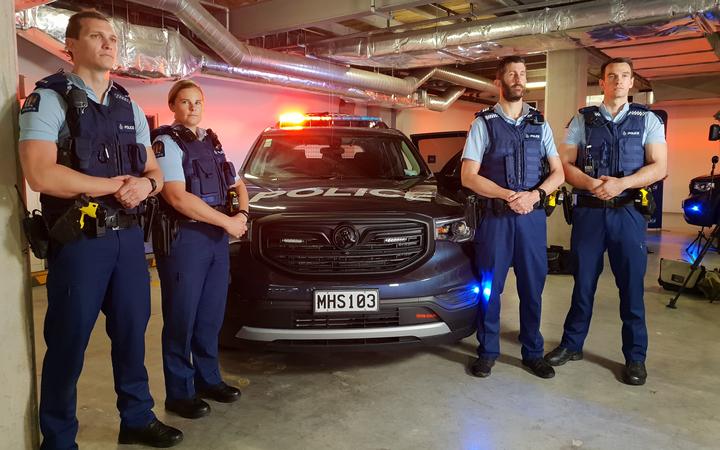 Police officers with one of the Armed Response Team vehicles. Photo: RNZ / Liu Chen
Māori justice advocates are seeking an urgent Tribunal hearing on the Police Armed Response Teams and are calling for them to be stopped in Canterbury and other regions immediately.

But data released under the Official Information Act shows the teams were deployed 75 times a day in the first five weeks. That's 50 times the rate that Armed Offenders Squads were called out last year.

Sir Kim Workman and Julia Whaipooti are the claimants, and their application says the Crown has breached Te Tiriti o Waitangi by failing to work in partnership with, consult, or even inform Māori about the trial.

Whaipooti said there had been widespread opposition to the trial, and many Māori leaders have been extremely concerned about the likely impact on marginalised Māori communities.

"Now we are putting lethal weapons in the hands of police when we know they use them mostly against Māori communities, that is really hōhā and it tells me we are putting racist policies into systemic practice of police - knowing that it tells me that Māori lives don't matter."

"When the Crown established an unarmed civilian police in 1886, it was with the conviction that New Zealand would become a civilised nation, ruled not by fear, but through allowing citizens a voice in how they should be policed. The principle of 'policing by consent' has been breached, and trust in the police has taken a massive hit."

The claimants say trust in police by Māori is at an all time low - and the argument that the pilot programme is protecting communities is untrue.

"Why would we arm a force that Māori don't trust, so it's not for our safety because the people that don't trust police are Māori so that is something again a decision made about us, to happen to us, without us. We weren't even told about this," Whaipooti said.

The claimants are actively engaging with police and hope to work closely work with them on this issue, she said.

"It's quite clear to me that even within the police, there is disagreement with how this policy came about and the decision of this policy. We are ready to actively engage, our bottom line is that the armed response teams need to stop and they need to stop today."

The Waitangi Tribunal has previously found that partnership requires Māori to have substantive input into decisions that substantively affect them and that the Crown has obligations to consult with Māori in order to make informed decisions - in the case of Armed Response Team's - both claimants says this has not happened.