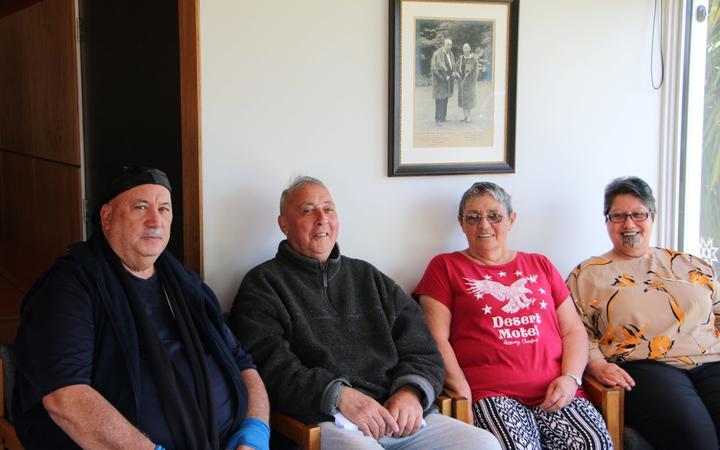 Rangiora musician Bobby Thompson-Browne, Tuahiwi kaumātua Tira-Roa Reuben and Tawhai Kimura, and Tuahiwi local Liz Kereru sitting underneath a photo of former Labour MP for Southern Māori, Eruera Tirikātene at Tuahiwi marae. Photo: RNZ
Some Ngāi Tahu voters in Canterbury are set to break their long-standing tradition of giving two ticks to Labour and instead giving their electorate vote to the Māori Party.

The Labour-incumbent Rino Tirikātene has held Te Tai Tonga seat for the last nine years and was the third in his whānau to be elected as a Labour Party MP for the southern-most Māori electorate.

His grandfather Eruera Tirikātene held the then-Southern Māori seat from 1936 up until he died in 1967, with his daughter - and Rino Tirikātene's aunty - Whetu Tirikātene being elected in his place.

She was beaten in 1996, meaning the Tirikātene whānau has held that seat for 73 of the last 83 years, unheard of in any other electorate in the country.

"It's not like a loyalty thing to Rino, it's that we've just been entrenched in Labour, and Labour philosophies, politics all our lives."

Reuben said while he was impressed by the Māori Party candidate Tākuta Ferris when he visited last month, it was not enough for him to switch. 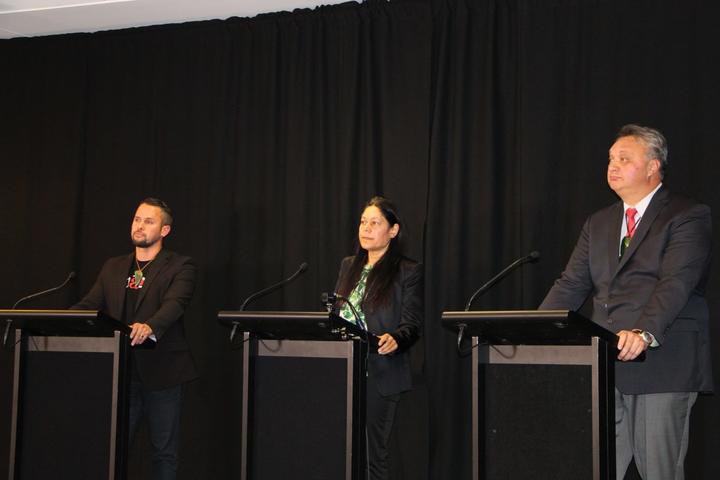 The candidates running in Te Tai Tonga at a Ngāi Tahu hosted debate on Tuesday (L-R) the Māori Party's Tākuta Ferris, Green Party candidate Ariana Paretutanganui-Tamati and Labour-incumbent Rino Tirikatene. Photo: RNZ
For only the second time in her voting life, kuia Tawhai Kimura would be giving her candidate vote to a non-Labour candidate.

She said she was voting for Ferris in the electorate to guarantee more strong Māori voices in Parliament.

Tuahiwi local Liz Kereru has only recently moved back from the East Coast, so would be voting in the Ikaroa-Rawhiti electorate but she was also splitting her vote.

She said many of her whānau were confident Tirikātene would get in off the party list so they were strategically voting for Ferris for the electorate.

"That's what I like about Tākuta, that he's tikanga driven so he didn't put himself there, he was put there by the kaumātua.

"Everything he does is tikanga-driven, he just walks it."

Rangiora local and musician Bobby Brown, who was still undecided on who he would vote for, said he felt Tirikātene's strong presence in the town was lacking.

"Does this individual trade on that name or are they actually doing something with it, and that's why I challenge tradition, not for the sake of challenging it but because we all have a brain inside our head and I think we should use it."

However, small business owner Cherie Tirikātene was still voting for her cousin, although she said she does not go easy on him because he's whānaunga.

"He might get sick of my phone calls because I ring him a lot ... but I talk with him for advice and a sounding board because he has so much knowledge, he didn't come down in the last shower.

"He might not be perceived to be a strong voice but it's because he has our tūpuna behind him and how he operates is with that steadfast calmness, and that's one of things I respect about him the most." 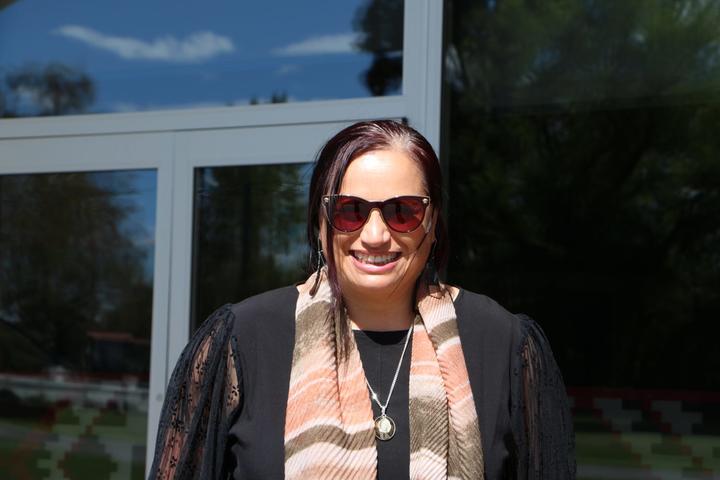 Small business owner Cherie Tirikātene says she'll be voting for her cousin Rino. Photo: RNZ
Ferris also has strong Ngāi Tahu whakapapa on his side as the nephew of the late great Piri Sciascia.

He was confident he could overthrow the Tirikātene dynasty by capturing the South Island Māori youth vote, in an electorate where the average voting age is only 24.

"I'm perfectly comfortable in the idea that Rino is beatable, he's absolutely beatable.

Education was front and centre for the rangatahi panellists at a Te Tai Tonga debate on Tuesday night, hosted by Ngāi Tahu.

A big issue for 24-year-old Te Rūnanga o Ngāi Tahu employee Madison Simons' was racism in the education sector, citing the proposal by the University of Otago to cap the Māori and Pasifika entry pathway, as an example of this.

She said based off this debate-alone, she would be voting for the Māori Party.

"Just [for them] to be able to open it and say their lead action is mana motuhake and giving us power to create our own future and create changes for our people ... so 100 percent backing Tākuta." 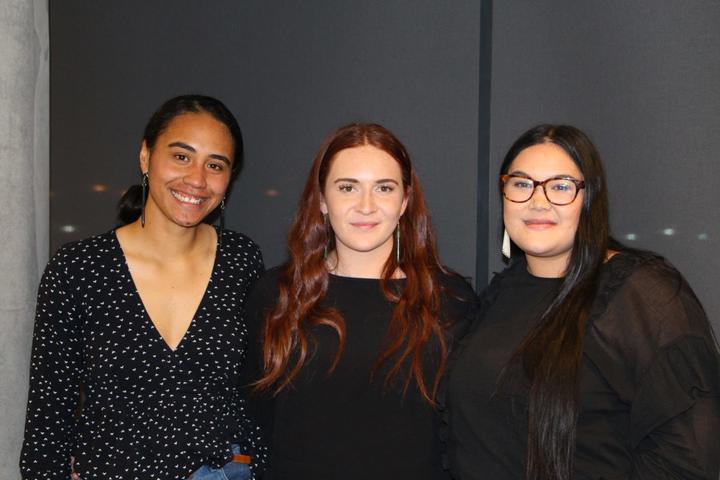 "I'm a big advocate for Te Aho Matua, for Te Kura Kaupapa Māori because it sees more than one part of the child ... at kura, they're not just trying to create good students but good people."

Wairau is a former student of the Māori medium school, Te Kura Kaupapa o Whānau Tahi, which was promised a new building over a decade ago, but the Ministry of Education recently told them it had run out of money because of the pandemic.

Tirikātene would not commit to the whānau getting a rebuild, and said they would be asked to consider all options including targeted repairs, a rebuild or a new school on a new site.

"Until the whānau have those clear options presented to them for them to consider and decide, it's a bit premature, but I must say the ministry has been taking too much time dealing with it and that's something we certainly want to see addressed."

Meanwhile, Ferris said if elected, Te Kura Kaupapa o Whānau Tahi would get a rebuild and all kura kaupapa would be done up, which he said would be paid for from the existing education budget.