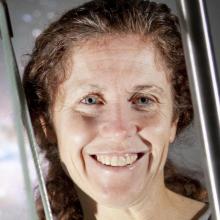 Physics professor Jenni Adams was presented with the 2021 Dan Walls Medal, the top award of the New Zealand Institute of Physics, at a ceremony in Wellington last week.

"It's a big honour (and) a little bit of a surprise," Adams said.

The award recognises the "excellent" work of physicists and astronomers in New Zealand.

Adams, who specialises in astroparticle physics and cosmology, works on a project in Antarctica called the IceCube collaboration, a "telescope" that aims to observe neutrinos, which are much smaller than other known elementary particles and notoriously difficult to detect.

She spoke to RNZ's Jesse Mulligan about the work that has earned her the top award:

Adams has been a part of some ground-breaking discoveries about how the universe works.

"My group at the University of Canterbury are members of the IceCube collaboration, which operates the IceCube neutrino observatory at the South Pole.

"Our collaboration has achieved a series of break-through results, discovering astrophysical neutrinos in 2013 and identifying the first source of these neutrinos in 2017.

It is an international collaboration, Adams said.

"But it was quite nice to be acknowledged because sometimes people in collaborations don't get acknowledged as individuals."

She also aims to encourage more women to take up science roles.

"I have had really good support ... I haven't felt like anyone is trying to tear me down. In my teaching, I try to encourage everybody, it doesn't matter what gender they identify with, everybody should feel welcome and able to do (science)."