Christchurch-based charity Recovery Aid For Tonga has a container of goods ready to send to schools in the tsunami-devastated Pacific Island nation - and now a fundraising drive is on the horizon so the shipment can set sail.

A charity auction and cultural night at the Loons Club in Lyttelton on Friday, June 17, aims to supply enough money to fast track the container from Christchurch via Auckland to Nuku'alofa and beyond next month.

The not-for-profit organisation is targeting youth affected by the tsunami and underwater volcanic eruption in mid-January.

"We’re trying to help rebuild some of the educational resources for these kids,” said RAFT spokesman Mark McHardy.

"We’ve got new stationery and books and pens and all that sort of stuff. 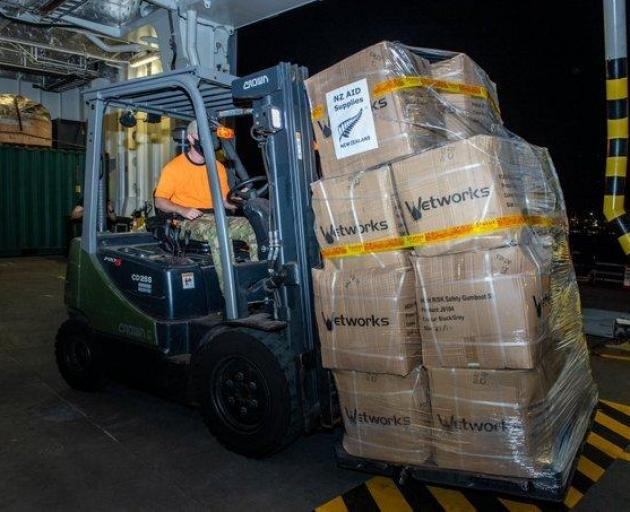 Recovery Aid For Tonga aims to fast track the container from Christchurch via Auckland to Nuku'alofa and beyond next month. Photo: Supplied / NZ Defence Force
"Some of the guys have been around some schools and got some second-hand books.

"We’ve had a fantastic response from a number of organisations with regard to sporting equipment.

"We’ve got 80 new pairs of rugby boots to send up.

"Auckland rugby are sending down 20 boxes of used rugby jerseys and shorts.

"It’s been quite awesome, we’re filling up the container nicely.

"Now we need to generate the funds to get this container sent up to Tonga,” said McHardy, who hopes to raise $10,000 through ticket sales ($30 each) and the auction.

Signed 2022 Crusaders and Moana Pasifika jerseys, cooking classes at Riverside Market and an accommodation voucher for seven nights on the Gold Coast are among the items going under the hammer.