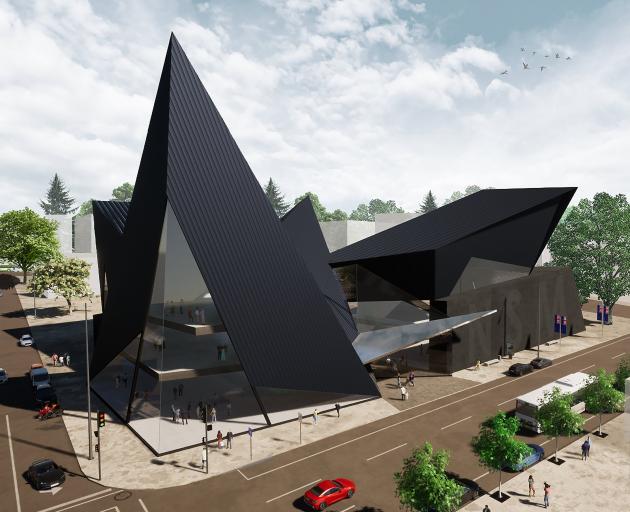 An artist’s impression of a proposed national sports museum in Christchurch. IMAGE: SUPPLIED
Sport New Zealand appears to be considering shifting the New Zealand Sports Hall of Fame from Dunedin to Christchurch.

A trust proposing a national sports museum, in Christchurch, yesterday confirmed Sport NZ had been in contact about the possibility of the hall of fame being part of the museum.

National Sports Museum Trust of New Zealand foundation president Bruce Ullrich said he received a note from Sport NZ saying the proposed museum was "being considered as one of several potential venues for the Sports Hall of Fame".

Mr Ullrich said Dunedin would also be on the list of possibilities, and confirmed he had not had direct talks with the sports hall of fame.

He presented the trust’s plans to Christchurch city councillors this week.

The trust is looking to raise $56,000 to conduct a pre-feasibility study for a proposed $75million sports museum.

Established in 2011, the trust has narrowed its focus to a site near the Christchurch Town Hall, or a second site within the cultural precinct.

The trust was not actively pursuing the hall of fame’s inclusion in the museum, Mr Ullrich said.

However, he said the trust would be "very happy" to accommodate the hall of fame as a part of its plans.

"It’s entirely in their hands," he said.
Hall of fame chairman Stuart McLauchlan said he would not comment on the suggestion when the museum trust had not even secured its feasibility study funding.

The suggested move amounted to a "nothing story".

"It’s an absolute nothing, I can assure you," he said.

"I am controlling the situation. If there was anything other than that, I would tell you, but there’s nothing, absolutely nothing."

The hall of fame is operating on a lifeline of funding support from the Dunedin City Council that runs out at the end of next month.

After Sport NZ funding ran out, the closure of the hall of fame loomed last year.

But the council stepped in and gave $50,000 to help the hall of fame get to the end of this financial year, on June 30.

Council community services general manager Simon Pickford said he was aware of Sport NZ talks with the sports museum trust about incorporating the hall of fame into the proposed Christchurch sports museum.

"However, we understand that proposal is at a very early stage and is looking for feasibility study funding," he said.

An options report for the hall of fame would be presented to city councillors on May 31 as part of long-term plan deliberations, he said.

Cr Sophie Barker said the hall of fame was part of Dunedin’s social fabric, and if it moved north, it would be a big loss for Dunedin.

"It was the inaugural New Zealand Sports Hall of Fame and we’ve got this huge history with it," she said.

Sport NZ could not be reached for comment yesterday.