More than 50 people are currently in managed isolation at New Zealand's border facilities so they can attend the sentencing of the Christchurch gunman in person. 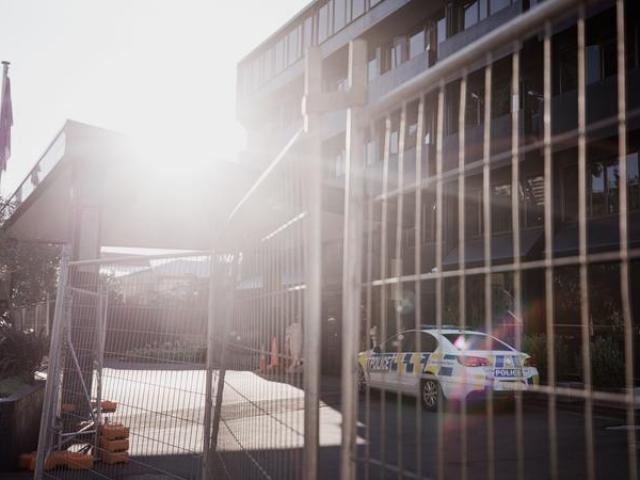 Police at a hotel being used as a managed isolation facility. Photo: RNZ /Dom Thomas
The gunman is set to be sentenced on August 24, having pleaded guilty to 51 charges of murder, 40 of attempted murder and one under the Terrorism Suppression Act in March.

Last month the government introduced short term visa exemptions for victims, families and support people under humanitarian grounds, as about half of them are not permanent residents or citizens, and so under the current border restrictions would not normally be able to enter New Zealand.

Thirty-four of them are victims and the rest family members and support people.

Numbers provided by Victim Support show the remaining number are made up of 13 support people, one minor travelling with family, and five people booked who were unable to reach New Zealand due to travel disruptions.

All of those people are now doing their 14 day managed isolation and arrived in "plenty of time" to attend the sentencing, and support each other through what will be a "pretty difficult" period, said Woods.

Of the 53, 28 are New Zealand citizens or residents, she says, but the rest needed visa exemptions for a short-term visit.

While those were granted, Woods says there were no applications for exemptions from isolating for two weeks, and it was not something the government considered.

"Absolutely not," she said.

"The list of countries ... we have some of the people coming from mean that it's vitally important that we do have 14 days of managed isolation, so that we can continue to keep Covid-free."

"The feedback I've had from the the Muslim communities here in Christchurch ... they want to make sure that Covid is kept out of New Zealand and there has been no indication that anyone would even want shorter isolation periods for this group of people."

None of the 53 will have to pay for the cost of isolating, not only had they all arrived before the new regime came into force, but there was a special carve out for them in the policy when it was introduced.

Given the high profile nature of the sentencing, and the potential distress for victims and families, Woods says there are special measures in place to provide "wraparound support".

"We are aware that this group is coming in at a particularly traumatic time, so we're working with police who have liaison members with each of the families around the specifics of each of the family that might be needed for, for the people that are coming in.

"But these are people that are coming in to support family members here in New Zealand. I think they're just incredibly pleased that in the middle of a global pandemic career, where it is incredibly difficult to move around the world, that they have been able to travel here to New Zealand to be able to support their family members, many of whom are those who lost immediate family members," said Woods.

There will also be extra financial assistance from the Justice Ministry for those who suffered gunshot injuries, and the families of those killed, to help pay for travel related costs.

Last week in the High Court in Christchurch, Justice Cameron Mander notified media live reporting of the hearing was banned with news of the hearing embargoed until the midday and end-of-day adjournments during the multi-day hearing.

Provision has also been made for overseas media and victims and their families who could not enter New Zealand due to the Covid-19 pandemic to view the hearing remotely.

However, they must agree to the reporting restrictions and additionally to not copy or capture the digital stream in any form.

Mander said the restrictions were intended to protect privacy and dignity of victims, and preserve the integrity of the court process.

"The Court is also aware of the need to take what steps it can to minimise the re-traumatisation of victims and their families and avoid, to the extent possible, the hearing causing further potential harm," he said.

The convicted terrorist is expected to speak at the hearing after firing his lawyers in July and electing to represent himself.