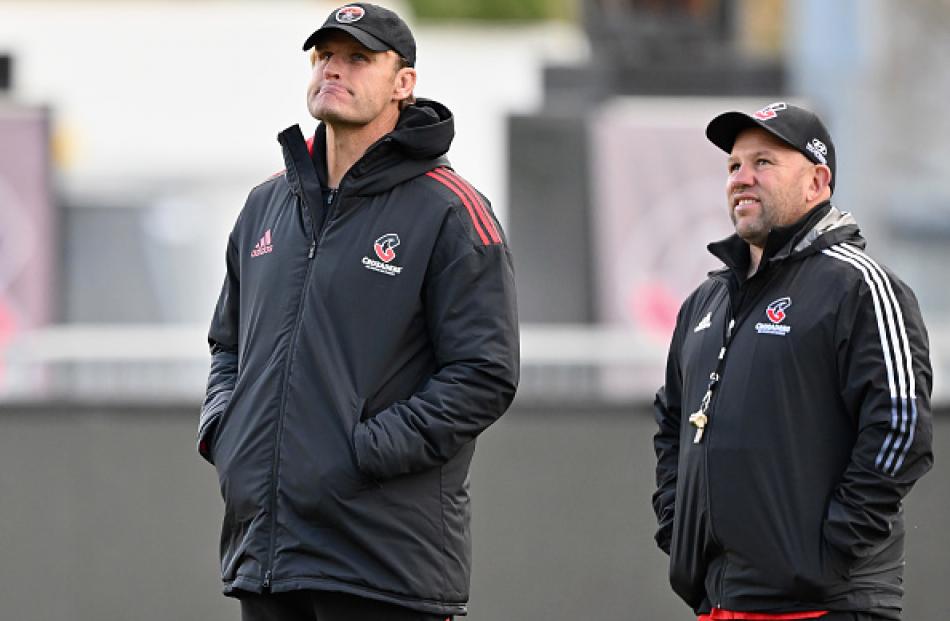 Scott Robertson and Jason Ryan. Photo: Getty
A senior Crusaders rugby coach has blasted Christchurch's mayor over the ongoing delays in building a new stadium, alleging: "She never wanted it."

Frustrated forwards coach Jason Ryan spoke out this morning over the city's 30,000-seat multi-use arena, which has had its opening date delayed again to 2026 and the price blown out by up to $150 million to $683m.

"Somebody's got to be brave," Ryan said.

"It's been something that's been continually going around in circles. As a citizen of Christchurch, someone who's lived here all my life, who's got my family here, I think it's pretty shambolic to be honest, of how the council are acting.

"I'm not sure [Christchurch Mayor] Lianne Dalziel has ever wanted one. What's it going to take?

Dalziel has been approached for comment – but she has been quoted in local papers over the last week, urging everyone to get on with building it.

But Crusaders chief executive Colin Mansbridge has come out to support the mayor, saying Ryan's comments were "unfair".

Mansbridge said while Ryan was "demonstrating how passionate he is for a multi-use arena", he probably wasn't aware of Dalziel's "passionate and outspoken" support for a new venue.

"She's been talking about cracking on, and getting on with it, ever since council took over responsibility, so it's a bit unfair that she gets singled out," Mansbridge said.

"From Jason's perspective, he's not across the detail [but] he's right across the frustration about not having an arena here."

Crusaders head coach Scott Robertson earlier this week urged decision-makers to be "brave'' over the stadium.

"I'm not a political animal at all, but I have to say something because I know a lot of people that care deeply about this city," he said.

"Leaders need to be brave. And if we don't now, we are going to be hung out as a public and a generation that is going to take another period of time.''

The project has been marred by controversy and, last week, it was revealed that the cost of building Te Kaha/Canterbury multi-use arena had jumped significantly.

It's resulted in fresh questions around who should pay for it, with 10 Christchurch city councillors writing to the regional council ECan in an attempt to get neighbouring councils to commit to funding.

City councillor Jake McLellan is aware the letter has already sparked conversations but says it needs to go further than that.

He said the regional council should be prepared to make contributions mandatory.

The covered arena has been planned to occupy much of the central Christchurch site bordered by Hereford, Barbadoes, Tuam and Madras streets.

The city lost its stadium centrepiece of Jade Stadium at Lancaster Park after the deadly February 22, 2011, earthquake.

Since then, the Crusaders have been playing at what was supposed to be a temporary stadium at the old Addington Showgrounds.