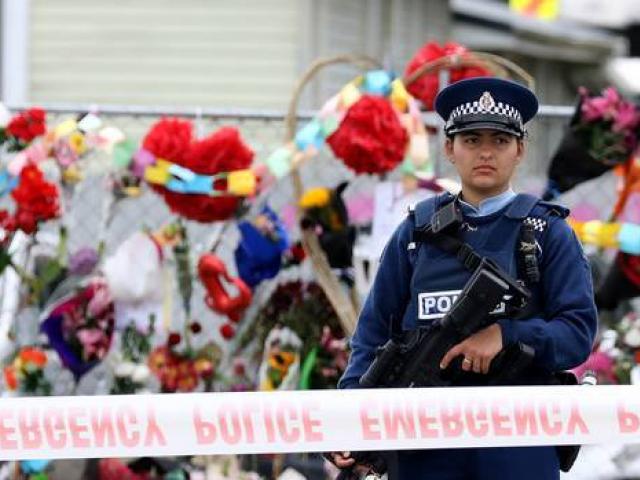 A policewoman stands guard outside the mosque on Linwood Ave after the attacks. Photo: Getty Images
The man accused of the March 15 terror attack was supplied 2300 rounds of ammunition by using a police mail order form that also revealed to police he had an AR-15, a Parliamentary select committee has been told.

The information was part of a submission from licensed firearms dealer Paul McNeill to the finance and expenditure committee, which is considering the Government's second tranche of gun law reform.

Mr McNeill, who is also director of the Aoraki Ammunition Company, appeared before the committee via video link, but his submission was quickly taken offline in case it might affect the accused's right to a fair trial.

He told the committee he received a police mail order form from the Dunedin arms officer in December 2018 to supply the accused with 2300 rounds of ammunition.

"At the time, (the accused) was issued with a 10 year [firearms] licence, expired 8 September 2027, indicating he was issued a licence in September of 2017, which from my information was only a matter of five or six weeks after he arrived in the country," Mr McNeill told the committee.

"This time, he has no family, no partner, no job, no footprint in the community, yet he was vetted as being fit and proper and obviously given a full licence which allowed him to arm himself."

Mr McNeill said the mail order form also said the accused was in possession of a Norinco semi-automatic rifle as well as an AR-15 - the type of military-style semi-automatic firearm the Government made illegal in the aftermath of the March 15 attacks.

"So the police were aware he had these firearms," Mr McNeill said in video footage that was removed from the Parliamentary website, but was later posted on social media.

At that point in his submission, which was being live-streamed on the committee's Facebook page, Labour MP Greg O'Connor interrupted to ask whether the information could be part of the ongoing court case involving the accused murderer.

"We need to take probably a bit of legal on this," Mr O'Connor said.

Mr McNeill responded: "This is my submission."

The chair of the committee, Labour MP Deborah Russell, then told Mr McNeill she would get back to him and ordered the video feed to be cut.

Dr Russell later told the Herald it was done as a precaution, as it would be a bad outcome if the submission affected the accused's fair trial rights.

She said Mr McNeill's video and written submissions were removed from Parliament's website while the committee considered legal advice, the outcome of which could see them put back online.

Mr McNeill was allowed to complete his submission to the committee privately, she said.

The Government's second round of gun law reform would establish a national register and tighten the vetting process for firearms licence applications, but has been criticised not only from the Council of Licensed Firearms Owners, but also farming, hunting and fishing groups.

The main opposition has centred around whether these measures will make any difference in terms of public safety, with a common request being to hold off until the royal commission of inquiry into the March 15 attack reports back.

Critics have also suggested the current system is good enough, if only the vetting process was done properly.

The Police Association supports a national gun register, which was advocated in the 1997 Thorpe report, the last major study on New Zealand gun laws, as a way to track guns and reduce the chances of them falling into the wrong hands.