The number of new daily community Covid cases has surged past the 10,000 mark today - for the first time since April.

The Ministry of Health reported 10,290 community cases and a further 12 Covid-related deaths on Wednesday. The last time the daily community cases were above 10,000 was on April 21.

The total number of publicly reported deaths of people with Covid-19 is now 1604 and the seven-day rolling average is 15.

Of the 522 people currently in hospital with the virus, 10 are in HDU or ICU, 60 are in Canterbury/West Coast DHB hospitals, and 12 are in South Canterbury hospitals. 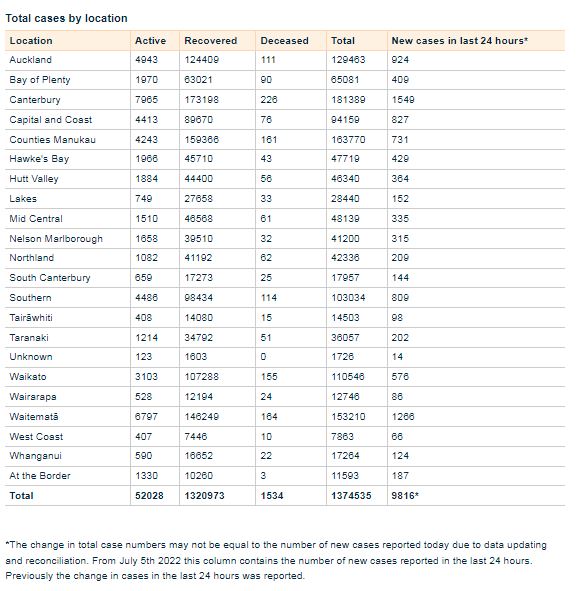 The seven-day rolling average of community case numbers in New Zealand today is 7591.

There are 233 new cases who have recently arrived from overseas.

Health officials say the past fortnight has seen a "significant increase" in Covid cases - on top of a rise in seasonal colds, flu and other respiratory illnesses.

"Wearing a mask remains one of our best measures to reduce transmission against infectious respiratory illnesses, including Covid-19," the ministry said.

"Masking up is particularly important when you are going to be around our more vulnerable members of the community, such as in healthcare settings and in aged residential care.

"The more layers of protection we put in place around the vulnerable, such as mask wearing, having our vaccinations, and staying away from them when sick, the less risk there is of them getting seriously ill."

PM: 'No expectation' of a return to red

Yesterday Aotearoa recorded 9629 new community cases - up by more than 3000 from the day prior. The Ministry of Health reported a further 24 Covid-related deaths. There are 493 people in hospital with the virus, including 11 in intensive care.

The moving seven-day average of Covid-19 cases was also up by 1917 and the Omicron subvariant BA.2.75 had been detected in New Zealand for the first time.

"We do know BA.2.75 has some characteristics that look like they may enhance its ability to evade immunity, similar to the BA.4 and BA.5 Omicron subvariants, and there is some early evidence overseas that it may be slightly more transmissible than BA.2," the ministry said yesterday.

The jump in cases prompted experts to say a return to the red Covid setting shouldn't be ruled out.

But Prime Minister Jacinda Ardern said she had "no expectation" the country will return to red traffic light restrictions.

"We've recently done a review and decided to stay in the settings we have. But keep in mind we have really important rules at the orange setting that are important to protect us," Ardern said yesterday.

She also cast doubt over whether the harsher gathering limits enforced under the red setting would make a marked difference to case numbers.

"There is a real question mark over that, particularly as we are seeing those rates in some of our older New Zealanders. We know the biggest thing we can do to make a difference right now is mask use and vaccines, so that's what we are going to do," she said.

"We can continue to manage the virus at orange, but are putting in place a range of additional measures to help manage a recent rise in cases," Verrall said.

She urged people to keep up to date with their vaccinations.

"We are seeing an overrepresentation of unvaccinated people in hospital admissions so we strongly urge everyone to make sure they are up to date with their vaccines."

Epidemiologist Professor Michael Baker told the Herald New Zealand has not yet learned from other countries handling their outbreaks well.

He says places like Japan and Singapore have an advantage, being mask-wearing societies that stay home when they are sick.

"Those are lessons we have not absorbed at all."

University of Auckland senior lecturer in computational evolution Dr David Welch said the Government must be considering the possibility of moving the country to the red traffic light.

"Our hospitals are already really, really full. Not only because of Covid but also because of other winter illnesses. We expect these cases to continue to rise and there'll be just more pressure on the health system.

"I certainly won't rule out going back into red within the next few weeks, but then again I'm not sure if it is politically feasible and whether people will listen this time."