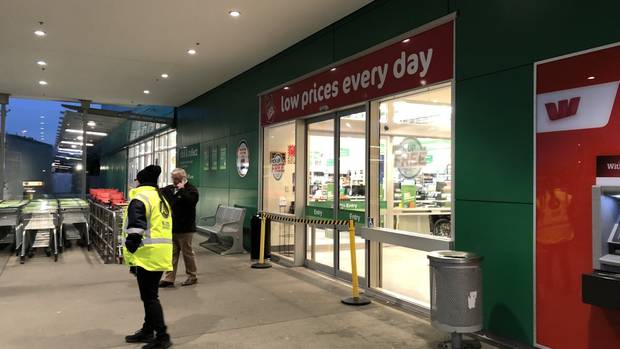 The Countdown at Spitfire Square is near Christchurch Airport. Photo: supplied via NZ Herald
A Christchurch supermarket has been closed after it was visited by a person who later tested positive for Covid-19 in South Korea.

The Countdown at Spitfire Square, near Christchurch Airport, is undergoing a deeper clean than usual.

Countdown spokesperson Kiri Hannifin said the cleaning is a precaution.

She said the order was made after the company was contacted by the Canterbury District Health Board in relation to the person who tested positive in South Korea.

It has been more than a week since the person went through the store. However, Hannifin said the stores are cleaned every day and she expected the Spitfire Square store to reopen tomorrow morning.

The Ministry of Health has been contacted for comment.

The Countdown is a five-minute walk from the Sudima Hotel and is opposite a hair and beauty salon, a Coffee Club cafe and an Anytime Fitness gym in a shopping complex.

A Sudima Hotel spokeswoman confirmed it was being used as a managed isolation facility and directed further queries to the Government response team.

A hotel spokeswoman said she was unaware of the claims a guest might have wandered to the Countdown.

Earlier today, Health Minister Chris Hipkins said there was no evidence the person who tested positive for Covid-19 in South Korea after travelling from New Zealand was infected here.

But amid an "abundance of caution", officials were contact-tracing two rows in front of and behind the person, who left New Zealand from Christchurch Airport on July 21.

The person had been in New Zealand since March 18 on a visitor's visa.