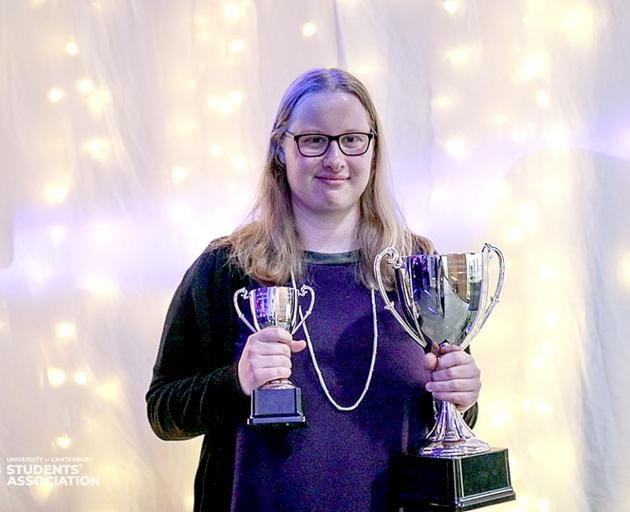 And now, she is empowering other young people to do the same.

The 25-year-old master’s student, who has a hearing disorder, received two major trophies at the Canterbury University Blues Awards.

Miss Hurton received four nominations for the community awards – the most ever received in the community section since the category was added to the awards three years ago.

“I feel very humbled. As a young person with a disability, when I won multiple Blues Awards I didn’t win them for myself, I won then for everyone in the disabled community who strives to make Aotearoa a more equitable and accessible country for people with disabilities,” she said.

“It great deal to me because the work many of us do in the disability space is often unseen and unrecognised so it was really special to be acknowledged by the university, and by the members of my community who nominated me for the awards.”

Miss Hurton was diagnosed with auditory processing disorder, which affects how the brain processes speech, in 2017.

She had been struggling with her hearing since she began studying at university in 2014, and in spite of numerous hearing tests in the year prior, a cause had not been found.

It was only after she pushed to be referred to specialist services that a diagnosis was finally made.

Following an initial bout of thinking APD was the worst part about her, she came to terms with her diagnosis and decided she would support others who may feel like they had to hide their truth.

Since then, Miss Hurton has gone on to set up ReDefine: Youth Development Programme, which aims to redefine what it means to be a young person with a disability and empowers them to take on a positive identity.

Miss Hurton is on the management team of Youth Voice Canterbury, providing pathways for young people to be included and involved in decision-making, to have a voice and to be leaders in their communities.

She is the first person with a disability to ever be on the committee for the Christchurch City/Banks Peninsula community organisation grants scheme, which has allocated over $700,000 of funds to the disability sector.

Additionally, she has featured on the New Zealand Human Rights Commission “Proud to be me” website, which helps to help raise the voices of disabled New Zealanders by sharing their stories.

She was also selected as one of 50 young people with disabilities to attend the I.Lead Conference, New Zealand’s first national conference for youth with disabilities, in Wellington last month.