This story contains first-hand accounts of the Christchurch 2011 earthquake that may be distressing for some readers.

Ten years on, what impact has the 2011 Christchurch earthquake had on survivors? In the first episode of Fragments - a six-part podcast and video series - a 6.3 aftershock surges near Lyttelton, across the Port Hills and into the surrounding suburbs.

Those who were in Christchurch on February 22, 2011, all have a story to tell.

Some have probably told their stories many times to friends and family - they've got used to them and the stories have come to define the day for them.

They're all talking about the same day, stories unfold simultaneously, they overlap - people cross paths and help each other.

Their accounts are all fragments of the same story - all little pieces of a bigger narrative - the story of a broken city.

RNZ marks 10 years since the major earthquake on February 22, 2011, with Fragments, produced and presented by Christchurch-based journalist Katy Gosset.

The series brings together an archive of first-hand accounts recorded in the months following the devastating earthquake, by locals Julie Hutton and Sandra Cameron Close.

Ten years on, RNZ checked in with some of the survivors to reflect on their experiences.

How has surviving the quake changed the way they live? 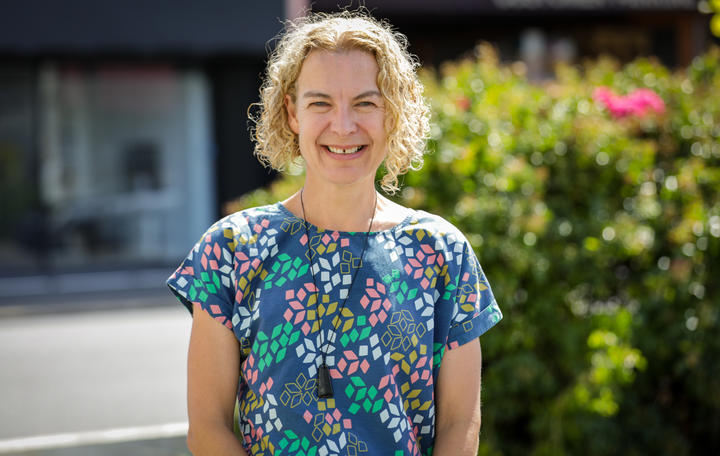 For many of the 367,000-odd people living in the wider city, the quake hit while they while they were in Lyttelton, Sumner or the Port Hills.

In episode 1 of Fragments we hear from Brent, Morag, June, Mark and Garth about what happened to them that day.

"And I must admit at that moment I thought, that's it, I've just ... I've run out of time and I just felt I'm gonna die. I just thought that was the end."

That's a quote from Morag Aldridge.

She was out jogging on the Captain Thomas Track and had to make a split second - possibly life-changing - decision about her next move.

"I just absolutely bolted ... it was strange because I was absolutely unaware of anything except escape...

"And essentially so I got round the one corner, headed toward the next and then I don't know what it was, but I could tell I'd just run out of time..."

Morag survived, and 10 years later says life has carried on. She's had another baby since the quake, still works at Christchurch public hospital and still lives in the same house in Sumner. She doesn't dwell on the day of the quake.

But her emergency kit is well stocked (mostly) and she never lets her phone battery run down.

And she can still recall the sadness she felt at the idea of not seeing her kids again.

Despite that, she still goes up the Captain Thomas track, when she can.

After the quake hit, some of Christchurch Gondola general manager Mark Forster's first thoughts were of the gondola and those there.

He headed for the site, where work was underway to get people safely off the hill.

"Nick, who was the rescuer on the day ... he was basically standing on top of the cabin there with every aftershock [saying] you know, oh, there's rocks coming and pointing in which direction for us to run to get away from them.

"You look back and think it was pretty freaky and I won't say stupid because, you know, your ... your priority is to get people out and make sure everyone's safe."

Ten years on, the tourist attraction is now back on its feet.

But he sometimes wonders if there were other things he could have done that day.

In Cashmere - a suburb on the Port Hills - Garth Gallaway was at home.

He'd just been told he was getting a $150,000 payout after the earthquake that had struck several months earlier in September 2010.

"So we headed around the house to spend the money at that stage, sitting down in our stone room, the earthquake struck. And looking back now I ... I think the thing that struck me about it was the violence of it... it was obvious to me straight afterwards that we would never get back into our house again."

Then, his thoughts turned to his 95-year-old neighbour, who lived alone across the street.

Listen to the first episode of Fragments

Brent was on a boat - a German cruise liner in fact - moored in Lyttelton.

He'd helped out a mate delivering fish to the ship and had gone onboard for a tour afterward.

"We opened the ballroom doors and then with that I swear the ship lifted about a metre up, down, up, down, twice and then just shuddered like hell."

The captain didn't believe it was an earthquake.

But it was, and Lyttelton was left looking "like a battlefield".

About 60 percent of the buildings in the main street collapsed and most still standing were damaged.

It took days for water to be restored and the tunnel to the town reopened.

Brent's daughter Lela was in the city centre, on her first week of a journalism course.

A journalist himself, Brent and Lela ended their day by sneaking into the city centre to deliver the news.

In Sumner, June Barrett was off to see a film at the Hollywood Cinema.

She recalled there were no birds in the estuary on her way there.

"There were none and there were thousands there Sunday night... But it didn't occur to me why they had gone, they were just gone."

The quake struck while she was in the Nurse Maude charity shop.

"Later, outside, she said she "looked behind me at one stage and there was the sea wall on Sumner Beach and I thought, please, God, don't let there be a tsunami because there was nowhere to go to get away from it."

You can hear more about what life is like for quake survivors 10 years on by listening to Fragments Episode 1: The Hills.

Fragments is written and presented by Katy Gosset and co-produced by Gosset and Justin Gregory. It's engineered by Alex Harmer and Rangi Powick. Video content is by Nathan McKinnon. Tim Watkin is the executive producer of Podcasts and Series.

Thanks to Julie Hutton and Sandra Close for their work in recording interviews and to those who agreed to be re-interviewed by RNZ.