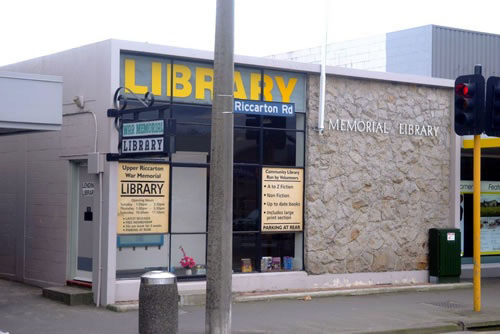 The demolition of the Upper Riccarton War Memorial Library is one of several projects not funded in the city council’s revised draft Annual Plan. Photo: NZHistory
A war memorial library, a clutch of derelict Christchurch City Council-owned buildings and a short street with a long history are at issue as the city confronts the Covid-19 pandemic.

They are not funded in the city council’s revised draft Annual Plan but are considered important by the Waipuna/Halswell-Hornby-Riccaton Community Board.

The revised plan cuts millions of dollars from proposed budgets in a bid to meet the funding shortfall caused by the lingering economic effects of the global pandemic.

In its submission to the draft plan, the board says it is frustrated “yet another year has passed” and the derelict buildings on the former Sockburn Service Centre site remain.

A “clearly apparent” budget shortfall is preventing the demolition works from being completed and this funding gap is “exceedingly disappointing to the board and the wider community”.

Site rehabilitation and decisions on the future of what the board considered an important site have yet to be determined.

The board warns it wants funding provided in the next long term plan.

The board was “especially keen” for a decision to be made on the future of the Upper Riccarton War Memorial Library, on Riccarton Rd.

The century-old library – the first of seven war memorial libraries built in New Zealand after World War 1 – was deemed earthquake prone in 2018.

It needs to be demolished, but the board noted the draft budget still did not include any funding or budget to get the job done.

The board has also gone into bat for Bradshaw Tce residents, whose street has again been left off the city council’s street renewals budget.

Consultation to improve the street finished just before the September 4, 2010, earthquake, but the work was deferred and eventually dropped from the budget.

Promoted by the board, it has had something of an on-again, off-again existence since then. It is not part of the city council’s proposed draft Annual Plan this year.

The board says the city council has a moral obligation to follow through and fix up “this very minor road.”

It was the sole remaining street in the cluster of projects completed before the earthquakes, an the board was “disappointed” it had again been overlooked.

The board acknowledges the city council has a difficult task in navigating the city through the impacts of a pandemic that is “unprecedented in our collective lifetimes.”

It supported the capital projects the city council proposed for the coming year, especially the successful delivery of the new Hornby Library, Customer Services and South West Leisure facility in 2022.

The city council has until the end of July to adopt its revised plan.