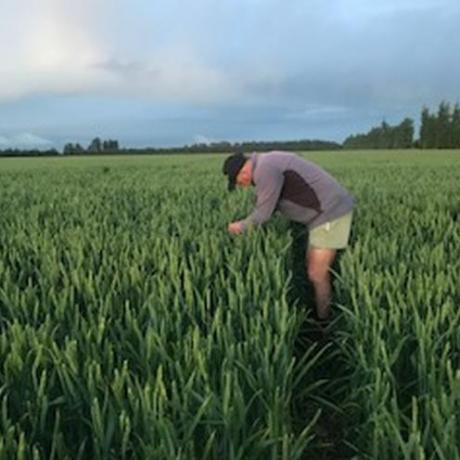 Brian Leadley checking for hail damage at his mid-Canterbury property. Photo: Supplied
The intense hailstorms in Canterbury have caused widespread damage to crops, including vegetables destined for the home and international markets.

Hailstones the size of golfballs and driving rain pelted down on Wednesday afternoon.

The extent of damage from the storm has raised the prospect of higher vegetable prices.

An egg tray shows the scale of some of the hailstones. Photo: Luke McGoldrick via NZ Herald
Some farmers are reporting up to half of their crops were damaged.

"A large part of that is into the domestic market, particularly the peas we grow as well as sweet corn and potatoes both domestic and export, I believe have been particularly hard hit.

"Just the stage those potatoes were at; a lot of them had just come up through the ground nice and softly. A lot of that leaf has been stripped off."

Mr Leadley said the extent of the damage would depend on how advanced the crops were in terms of ripening.

On his own property, the pea crop is just one month from harvest, and the storm bruised the plants badly.

"It's just been chopped right off by the hail storm."

Brian Leadley looks for damage to his pea crop. Photo: Supplied
Bruised plants were more vulnerable to diseases and fungi so farmers wouild have to spend more money on protecting those that remain.

Mr Leadley said farmers didn't often buy insurance for crops because it was expensive, though wheat is protected by a compulsory levy paid throughout the industry.

Another farmer estimated that some farmers were facing 20 to 30 percent of their crops affected, though at least some may have suffered damage to half.

Mr Hurst said the hail had a pretty direct path so only sections of farms were damaged.

Farms closest to Timaru were likely to have been the most badly affected, he said.