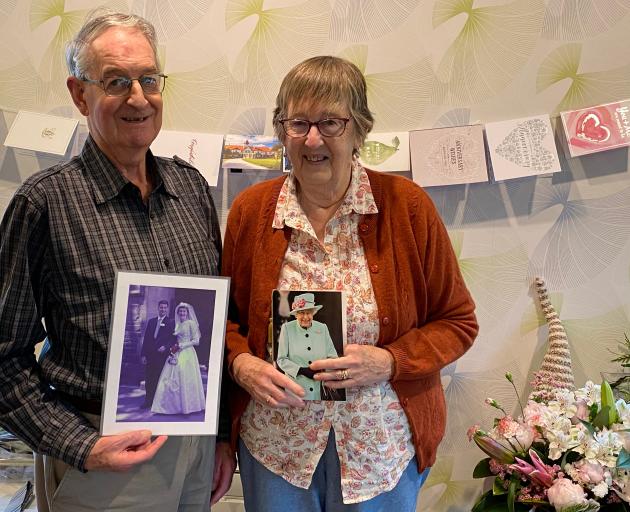 Dunedin couple Anne and Gordon Abernethy hold a photo of their wedding day in 1961, and the card they received from the Queen to mark their 60th wedding anniversary last week. PHOTO: BRENDA HARWOOD
A chance meeting at a harrier club Saturday night dance in Christchurch has led to a lifetime of love and family for Anne and Gordon Abernethy, who celebrated their 60th wedding anniversary last week.

Both based in Christchurch in the late 1950s, the keen harriers regularly took part in Saturday night socials during harrier season.

The young Anne Kinvis and her friends would take over playing the piano while the band had supper, and it was during one of these sessions that she caught Gordon’s eye.

"I admired the piano player from across the room, and so I asked her out," he said.

At the time, Gordon was working as an engineering draftsman for the Ministry of Works, while Anne was working in the War Pensions section of Social Security.

The newly married couple quickly moved to Dunedin, where Gordon had grown up, and rented while they built the home in Mosgiel they and their growing family lived in for 37 years.

"They are five kids to be proud of," Anne said.

"They have all been successful in their lives, and we are so blessed that we have always been a close family," she said.

Gordon retrained as a teacher and taught for 14 years, while Anne’s major focus was the family, although she also worked for Otago Savings Bank and Income Support.

Anne also continued to play the piano and organ, and was organist at Mosgiel Methodist Church for many years, as well as in Ashburton.

The church was always an important part of life for the Abernethy family, with Gordon becoming a lay preacher and then retraining in the 1990s to be ordained in the Methodist Church.

Anne and Gordon moved to Ashburton in 1998 and lived there for 16 years, while Gordon was with the church, before retiring and returning to Dunedin in 2013.

The couple now live in Mornington, with several of their children and 10 grandchildren living within just a few kilometres.

Having family nearby meant that they were on hand to help when needed, such as when the garden became too much to handle.

"We feel very fortunate to have them close by," Gordon said.

Anne and Gordon’s 60th wedding anniversary has been noted across the country and around the world, with cards commemorating the occasion arriving from the Queen, the Governor-General, the Prime Minister, the Minister for Senior Citizens, local MPs, and Dunedin’s mayor, along with friends and family.

"It has been very nice to be congratulated by so many people - we feel quite special," Anne said.

Twenty-one Dunedin-based members of the Abernethy family joined Anne and Gordon, now aged 82 and 83 years respectively, at Glenfalloch for a 60th anniversary celebration on Sunday afternoon. Plans are also taking shape for a "knees up" with the whole family, including those in Auckland, in the new year.

So, what is the secret of staying happily married for 60 years?

"Love, acceptance, and give and take."