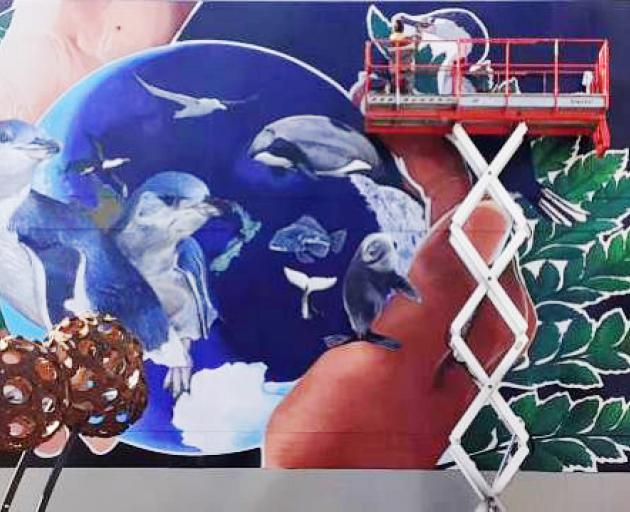 The new mural stands opposite the Bus Exchange on Lichfield St. Photo: Andy Brew ​
Christchurch’s striking street art scene has a new kid on the block. 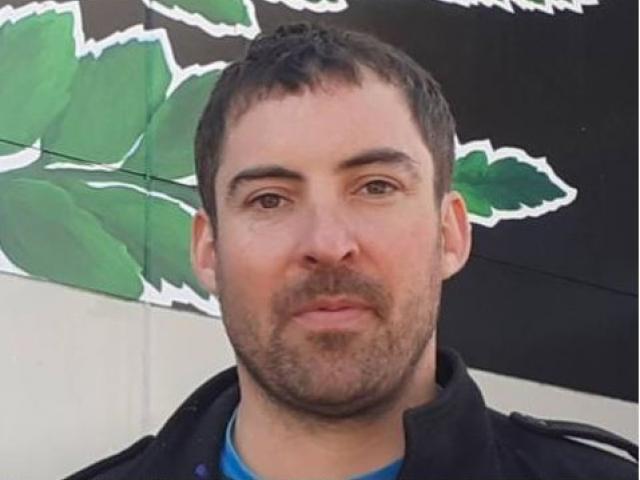 James Nikitine. Photo: Andy Brew
The latest instalment to the burgeoning portfolio of murals is the creation of James Nikitine, founder of charity the Blue Cradle Foundation.

Adorning the wall of the KiwiBank at the intersection of Lichfield and Colombo Sts, the giant painting took Nikitine and his small team of artists a month to complete, often working day and night in all types of weather.

Called ‘The Ocean is in Our Hands,’ the artwork was designed and created by local artists Richie ‘Pops’ Baker and Olly Kade of OK Creates.

The mural, said Nikitine, has an important message behind it.

“This is more of a statement,” he said, “the idea is to bring the ocean to the central city.”

Nikitine said Christchurch was seen as a farming city rather than a coastal city, and as a result, this part of the region was being ignored.

“Some kids have never been to the ocean, but they live here, and they grow up here and it’s right there,” he said, pointing over his shoulder.

Nikitine said that the city’s street-art movement was redefining the city’s culture and identity post-earthquakes and the ocean should play a part in the new version.

“Christchurch is not so much the cathedral-centric garden city it once was,” he said, “It’s Ōtautahi now, 2.0, the city is changing every day so I think we could very well include the ocean in our narrative.” 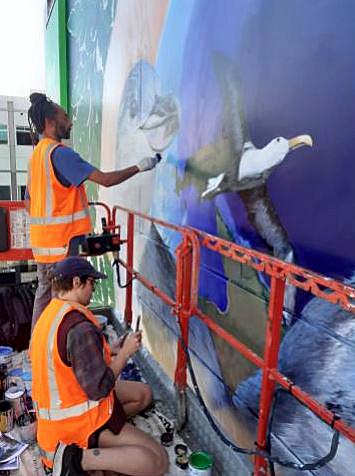 Richie ‘Pops’ Baker and Olly Kade add the final touches to ‘The Ocean is in Our Hands’. Photo: Andy Brew
Of British, French and Russian descent, Nikitine said he first fell in love with New Zealand 10 years ago while backpacking across the country, and returned to settle here several years later.

An Edmund Hillary Fellow, Nikitine’s career as a globe-trotting, international consultant in the ocean science sector was severely disrupted due to Covid, and he found himself sitting idle in Christchurch.

“I realised I could start something here, that I can grow over several years, that has all the components of my background and knowledge and that serves a purpose as well,” he said.

“Ocean education was something I really wanted to give back to the community, so I set up the Blue Cradle.

“Blue Cradle means we come from the ocean, we live because of the ocean, and we have a responsibility to steward the ocean and that’s really what Blue Cradle’s kaupapa is.”

Co-designer and leading artist ‘Pops’ said the inspiration behind the painting was about celebrating the diversity of the world that we all share.

“We need to act as willing kaitiakitanga [guardians] of our whenua [land], rangi [sky] and, specifically indicated within this mural, our moana [ocean],” he said.

The mural was partly funded by the city council and Environment Canterbury, along with private donations, and was sponsored by Hirepool, Resene, the Connect Group and the Lyttleton Port Company, among others.