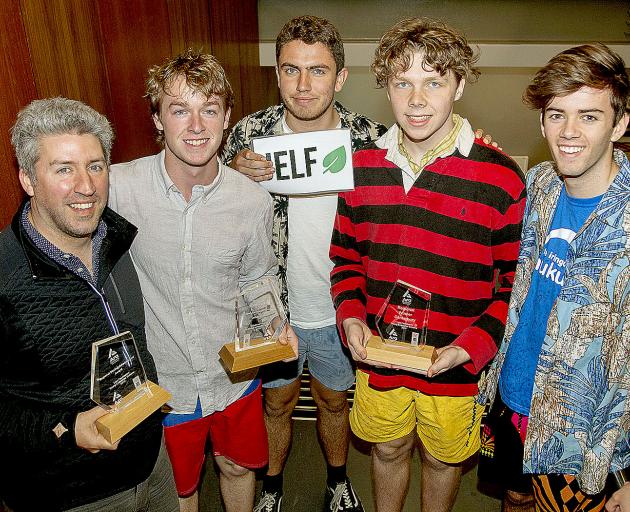 Josh McKernan, of Woolston, Lukas Hornell, of Cashmere, Lyttelton’s Finn McCabe, and Eddie Hogan, of Mt Pleasant, came out on top at the Young Enterprise Scheme regional finals and awards with their new product named JELF.

They teamed up to create the eco-friendly alternative to A4 and A3 laminating pouches.

The group also won the opportunity to present JELF at the national finals in Wellington on December 4.

Finn said the members put their heads together at the start of the year in a bid to invent a new product as part of their business studies project.

He said as they discussed their ideas, they wrote them down on a sheet of laminated paper.

However, it ended up being the laminated paper itself which sparked their product idea.

The awards were held at Ara, where the finalists pitched their ideas in front of a panel of judges and fought for the title.

There were 132 teams entered in the competition, which was narrowed down to six finalists.

“We never expected this at the start of the year.”

He is moving to Wellington to study a Bachelor of Commerce at Victoria University next year but said he will continue to focus on getting JELF off the ground with his teammates.

“At the moment we haven’t sold anything, but we’ve started making pre-sales,” he said.

The group is also looking to create other products such as shrink wrap. Another group of Cashmere High School students finished second at the awards with their company Pivot.

The students business teacher Matt Benassi won the National Teacher of the Year Award at the event.