Juvenile kākāriki hitch a ride into forest with Christchurch Helicopters 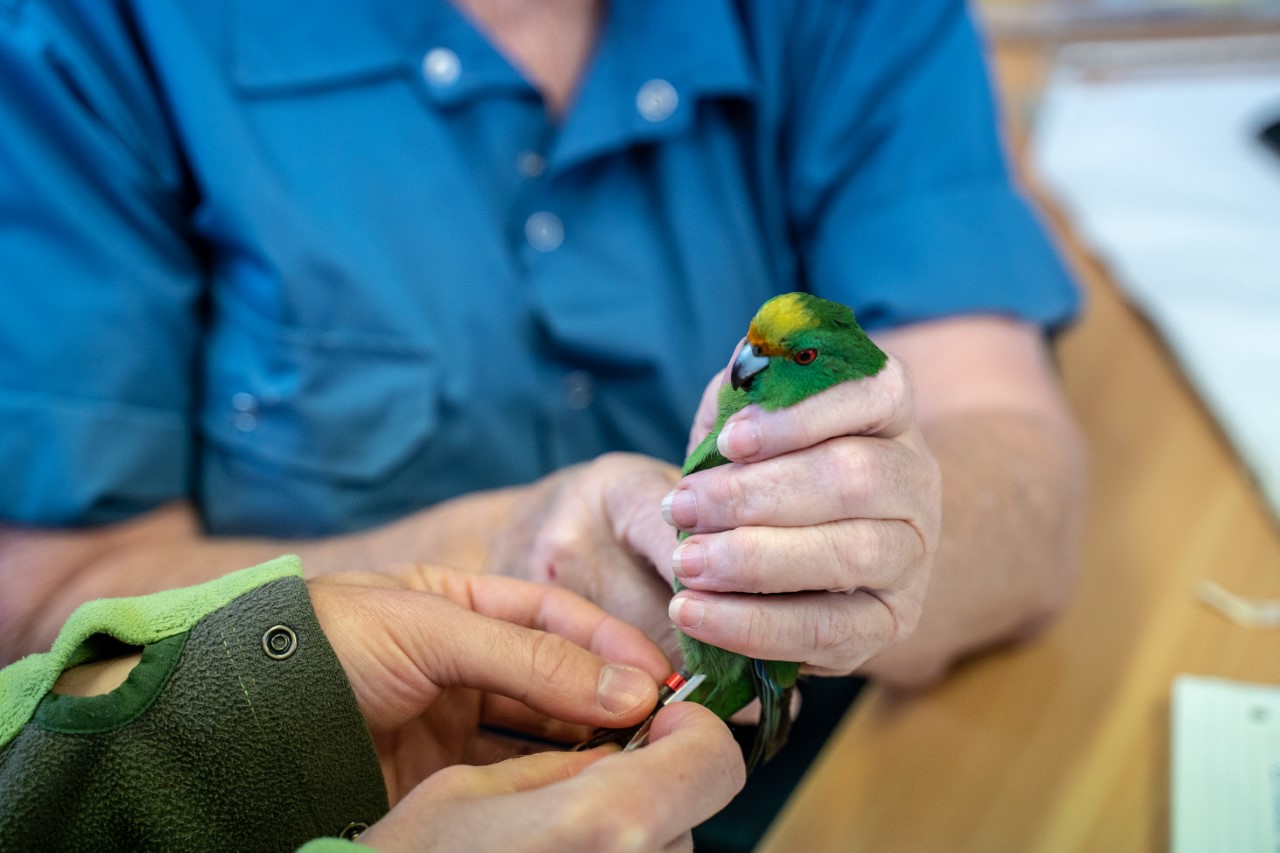 A kākāriki karaka is banded at Isaac Conservation and Wildlife Trust to prepare for its release into the wild. Photo: DOC
Recent successes and a setback for the critically endangered kākāriki karaka/orange-fronted parakeet highlight the highs and lows for conservationists working to save this taonga species.

Ten captive-raised juvenile kākāriki flew with Christchurch Helicopters into the Hurunui South Branch in Lake Sumner (Hoka Kura) Forest Park on Wednesday, bolstering the wild population. They will be released into the wild today after spending two days acclimatising in an aviary.

The budgie-sized birds were raised at The Isaac Conservation and Wildlife Trust (ICWT) facility in Christchurch, where a successful breeding programme has been running since December 2003.

In the Poulter valley in Arthur’s Pass National Park, six eggs have been retrieved from a nest and taken back to ICWT.

These will enhance the captive breeding programme’s genetic diversity as the father is thought to be a wild bird from the valley.

Unfortunately, this comes after 17 chicks in the captive breeding programme died from heat stress during the unusually hot days last week, when temperatures climbed to 37 deg C.

In addition to those released, ICWT has another 20 chicks in nest boxes and 17 fledglings which survived the extreme temperatures and will boost the wild population in the future.

DOC eastern South Island operations director Nicola Toki said last week’s deaths show there can be unexpected setbacks while working to save a species, but the overall programme continues to be very successful.

“While any kākāriki karaka deaths are a tragedy, this is a small setback for the breeding programme, as those pairs that lost chicks are expected to breed again this season.

“The Trust’s captive programme has raised more than 500 kākāriki that have boosted the wild population. Without their efforts, we expect the birds would already be extinct in the wild.”

Te Rūnanga o Ngāi Tahu Kākāriki Species Recovery Representative Yvette Couch-Lewis says: “It’s very sad that we have lost these birds, and it really highlights how fragile these manu are and how difficult they are to breed within captivity. However, we are reliant on this breeding programme and we will work with Isaacs on ways to mitigate future risks to the species. 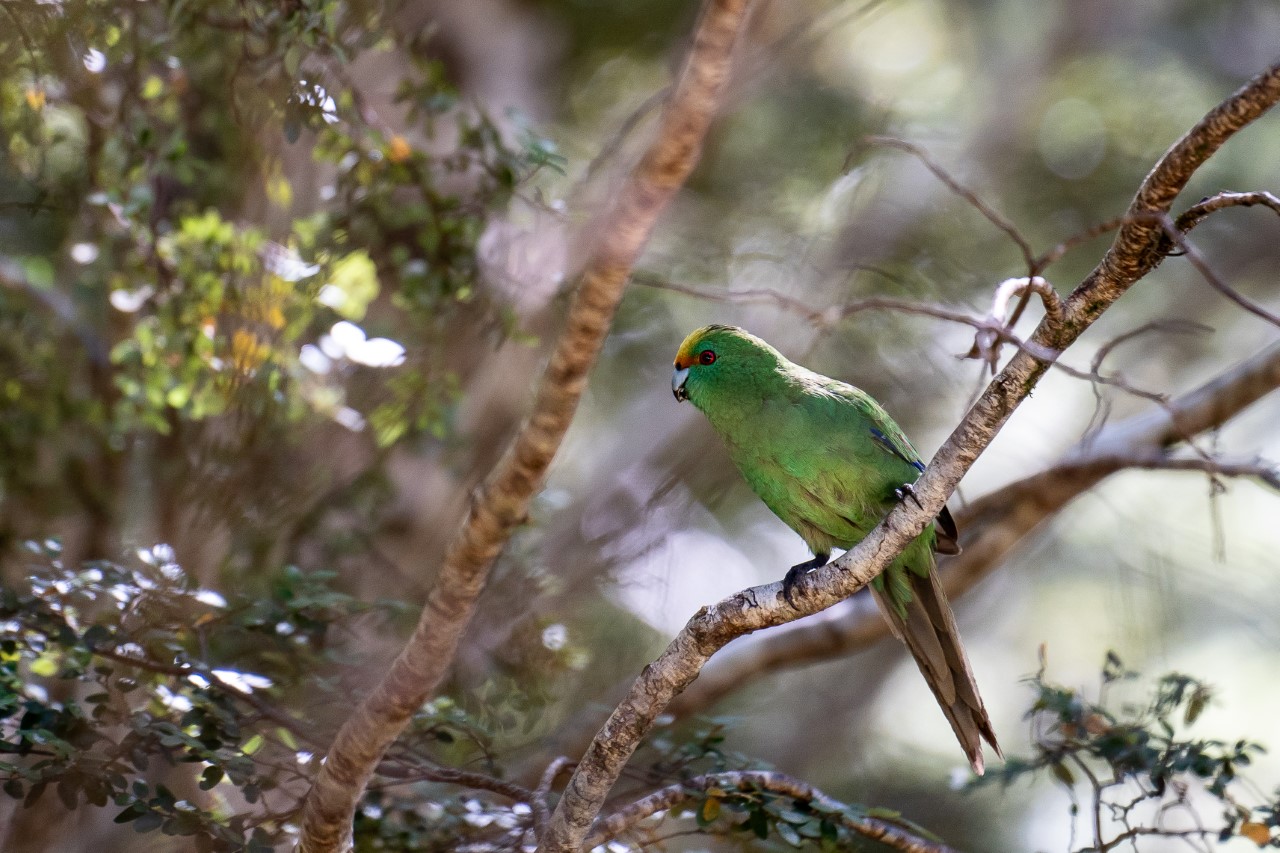 A wild kākāriki karaka in the Hurunui South Branch in Lake Sumner (Hoka Kura) Forest Park. Photo: DOC
“It’s important to note that last year we did several releases into the South Branch and have since found a number of eggs and chicks, so without the amazing work done by the team at Isaacs we wouldn’t have the numbers we now have in the wild. We will continue to support Isaacs to protect this critically endangered taonga species and work in partnership with DOC to see the kākāriki once again flourishing, that is our dream.”

Toki said the trust did everything they could to manage temperatures during the hot spell.

ICWT has a sprinkler system in the aviaries that is used whenever temperatures exceed 28 deg C and it was in use last week. Nest box vents were also opened, and lids removed during hot days to increase ventilation.

The nest boxes could not have been moved to a cooler location because the disturbance would have caused the parents to abandon the chicks.

DOC staff will meet with ICWT to review what happened and look at whether extra measures can be taken to reduce temperatures in the aviaries on hot days.

ICWT intends to trial battery-powered fans in the aviaries to try and increase ventilation to the nest boxes.

Toki said the wild population was not expected to lose chicks to heat stress as the higher elevations they live at tend to stay cooler and the forests provide some temperature regulation.