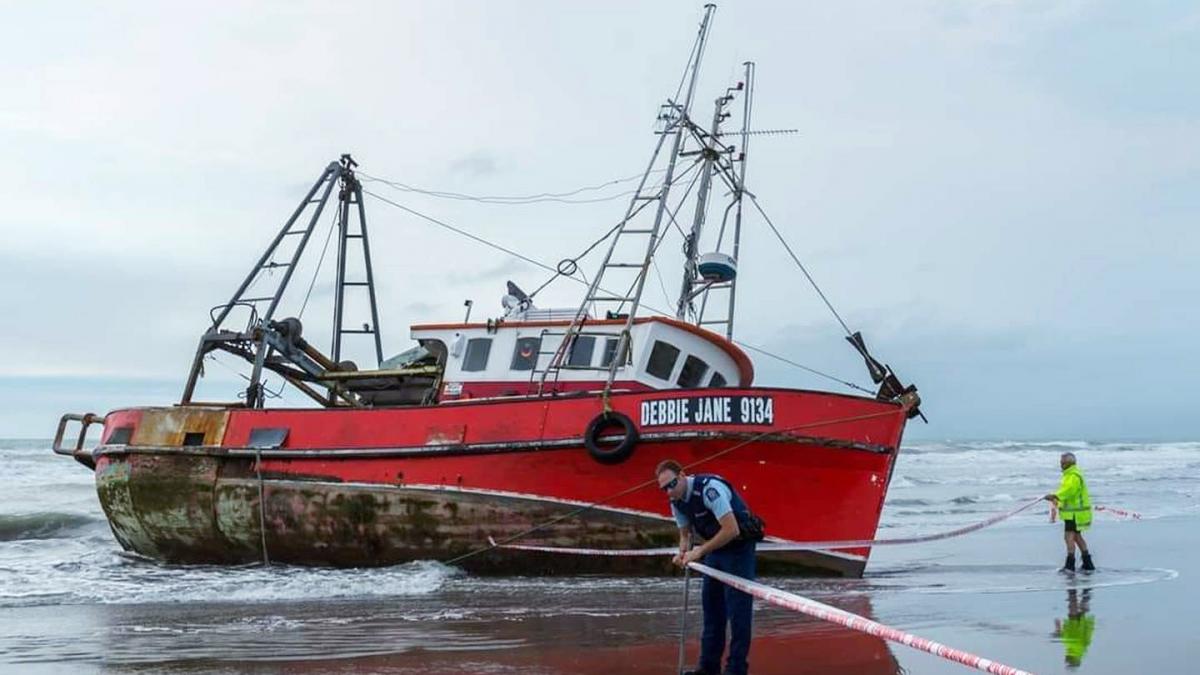 The Debbie Jane grounded on Waimairi Beach in 2019. Photo: Kiwi Creative Imaging
Shortly before a trawler skipper lost his bearings in gathering darkness off the Christchurch coast, one of his crew had rolled him a cannabis joint.

Maritime New Zealand's summary of facts does not say whether the skipper, 67-year-old David Anderson, actually smoked the joint, but the trawler ran aground on Waimairi Beach a few hours later.

The Debbie Jane's disastrous trip from Akaroa to Nelson in December 2019 was detailed in the Christchurch District Court, when Anderson admitted two charges.

He admitted safety breaches under the Health and Safety at Work Act, and the Maritime Transport Act, and was remanded at large - no bail was required - for sentencing in Christchurch on August 23.

Anderson appeared by video-link from the North Island, where he was located after publicity about an arrest warrant being issued when he failed to appear in Christchurch.

He assured Judge Tony Couch that he would appear for his sentencing. He was going down to Picton and Nelson, he said. No print-out of Atkinson's criminal record was available at court, but he told the judge he had no similar convictions - just a conviction for drink-driving.

The Health and Safety Act charges carries a maximum penalty of $150,000 but Anderson also assured the judge he was a working skipper and was able to pay a fine.

No pre-sentence report was ordered.

The fishing company and the owner of the 14.26m commercial fishing vessel have been prosecuted separately.

In December 2019, the owner hired Atkinson to skipper the Debbie Jane from Akaroa to Nelson, fishing for tuna on the way.

Maritime NZ said Atkinson held a Coastal Launch Masters certificate. He had experience as a skipper on crayfishing vessels in Gisborne, and as crew on a tuna fishing vessel in Australia. He ceased working as a fisherman in 2004. Since then he had two days as skipper of a commercial fishing vessel in April 2018, but his employment was ended early because of concerns about his ability to skipper the vessel.

As crew for the Akaroa to Nelson trip, Atkinson engaged a 41-year-old woman, and a 73-year-old retired school teacher who was living with him. Neither had any commercial fishing experience.

They drove to Akaroa where the owner showed Atkinson over the vessel, and told him that the autopilot was "a bit dickey" and there were arrangements for it to be repaired in Nelson. There was no check on Atkinson's experience and training, and he had only rudimentary knowledge of how to use the navigational equipment on board.

The vessel left Akaroa at 11am on December 21, 2019. The autopilot malfunctioned as they reached Akaroa Heads. Atkinson switched it off and navigated by sight.

They travelled around Banks Peninsula, passing about 70m off dangerous rocks at Sumner Head, and continued on an erratic course up the coast.

By 9pm, Atkinson had become disoriented and was not sure where he was. Before this time, the woman crew member had rolled a cannabis joint for him.

At 11.04pm, she called 111 to say she was on a fishing vessel that she could not identify, and that Atkinson was having difficulty breathing and was steering the vessel in circles.
Police tracked her phone to Waimairi Beach, north of New Brighton, and then found the vessel circling offshore in heavy swells.

It then turned directly towards the shore, grounded, tilted, capsized, and righted itself.
No helicopter winch rescue was possible in the conditions, and a paramedic had to swim out to the Debbie Jane. He found Atkinson and the two crew on the starboard side, wearing old, faded life-jackets which had not been tied on properly. He got the woman ashore, and then returned for other two, one by one. The male crew member suffered hypothermia.

Atkinson said he navigated the Debbie Jane in to shore because he was not sure where he was. He believed the lights he could see were Cheviot - actually 110km away. He dropped anchor to secure the vessel, but the anchor dragged the vessel into the heavy surf on the beach.

The Debbie Jane grounded at the beach and was hauled away a few days later.