0 Comments
Care workers have been out in force on Monday, protesting on streets across the motu over low pay rates.

The government has offered a 3 per cent pay rise, but workers have called that a slap in the face.

They say it is insulting after working through a pandemic and now face the rising cost of living.

They are looking for an urgent pay increase before legislation that sets their pay and qualification requirements expires in just over a month.

The government has so far indicated there is unlikely to be funding for more than 70 cents an hour per worker for an 18-month period.

Chants were heard across the country yesterday, workers yelling as they demanded better pay, and drivers honking their horns in support.

It comes after about 300 health workers from a range of specialties and backgrounds marched through central Christchurch as part of their strike action last week.

Care and support workers' pay rates, which are set by law, will soon expire.

Care worker and union member Tamara Baddeley found out what you can buy with the offered 70-cent per hour pay rise.

"It gets you a 3B1 notebook, or two small onions, or a Chupa Chup - that'll feed the family - or one banana or a couple of carrots or two potatoes - that's really going to feed a family isn't it?!"

She said she felt "undervalued, unappreciated and taken for granted".

"The 70-cent an hour pay offer they've given us is a slap in the face for all the hard work and experience and skills that we as support workers and rest home workers and residential disability care workers have," she said.

Multiple Sclerosis New Zealand co-ordinator and former care worker Kelly Davy said she was devoted to her job, but felt undervalued with the proposed rise.

"Physically demanding, emotionally demanding, you're looking after other people's loved ones. I do that with love and heart and passion, because I treat people how I would like to be treated." 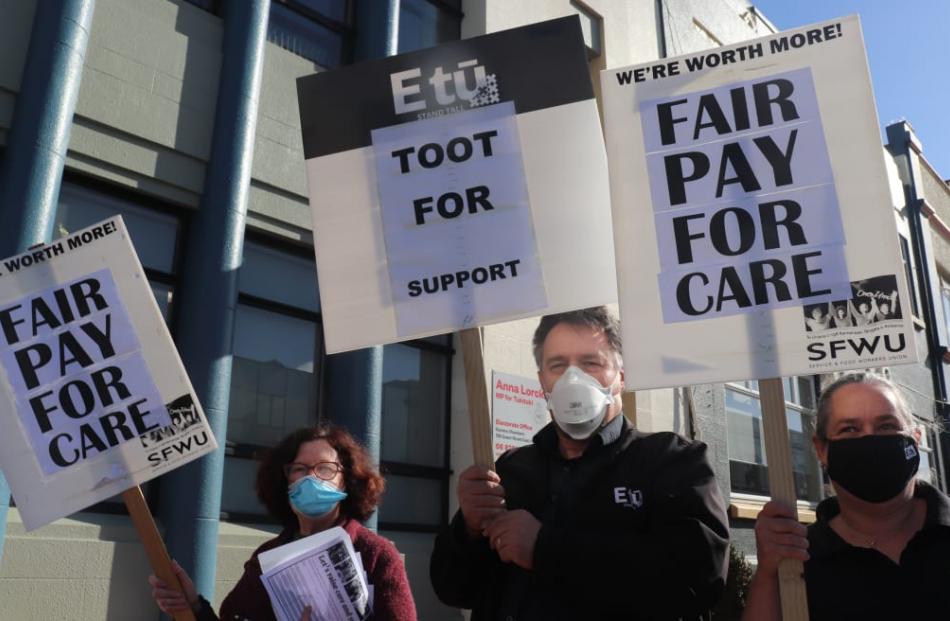 "Because it didn't solve any of the problems - it hasn't solved the staffing ratios," she said.

"Some staff are working 16-hour shifts - it hasn't solved the pressure that they have on them when there's only two staff to 29 residents - they need to be valued for that."

"As you can see, we've got a group of healthcare workers and if you look at the people that are protesting - predominantly older, middle class women -- that's not OK that we continue to undermine the health workforce and that's what this is about today," she said

She had a direct message.

"70 cents? How disgusting. Get back to the table and start to negotiate around equal pay - that's all that their asking for is fairness, equity - the same thing that you expect - when you are a patient in the wards in the aged care facilities - care and respect."

The call for the government to act also came from employers.

NZ Health Group is the largest community health service provider, employing around 11,000 people, helping with in-home care across the country.

Its managing director Josephine Gagan said the current offer would not be good for her staff.

"What's being proposed at the moment from the government is really just not acceptable and it's going to put our staff in a really, difficult bad situation. They're going have to choose as to whether they leave or and they do continue working in the sector and making a difference to these vulnerable people."

Minister of Health Andrew Little was in Geneva today, so could not speak with RNZ by deadline.

But in a statement, he said he was working with officials, unions and employers to secure a "modest" pay rise for these workers, which would be on top of the out-of-cycle 2 per cent pay rise they received at the end of last year.

However, he wanted to put the "real effort" into the pay equity claim the unions wanted to work on.

"In 2016, homecare and support workers won an historic court case that gave them the right to pursue pay equity, but a deal done with the previous Government barred them from the right to do it. That legislation, the Support Workers (Pay Equity Settlement) Act 2017, is due to expire on June 30.

"That is where the real effort should be going, and my promise to home care and support workers is that I will work with them to get them real pay equity. It's expensive, difficult and time consuming but it is the right thing to do. There is no place in 21st century Aotearoa New Zealand for 1950s' attitudes to work predominantly carried out by women."

The Ministry of Health did not respond to a request for comment by deadline.