0 Comments
A 43-year-old man appeared in court for the second time on Thursday charged with the murder of a homeless woman in Christchurch.

Police were called to reports of an assault near the Countdown supermarket on Hawke St, New Brighton, at 10.40pm on Wednesday.

The victim, a woman in her 40s who was reportedly homeless, was unresponsive when emergency services arrived at the scene and died while being transported to hospital.

The man was taken into custody at the scene and charged with murder on Wednesday morning.

A homicide investigation is under way in Christchurch after the death of a woman. Photo: George Heard
Detective Senior Sergeant Damon Wells said on Thursday afternoon police were continuing with their scene examination.

"Police will remain at the scene overnight. Formal identification of the deceased woman has not yet occurred," he said.

"Police are not in a position to name the woman at this time."

The man made a brief first appearance at Christchurch District Court on Wednesday morning, charged with the murder of "a person unknown". But the case was delayed so the duty lawyer could speak to him.

The man appeared via video-link but all details of his court appearance were suppressed by Judge Gerard Lynch. The judge also suppressed the man's name.

His address was given as a property in central Christchurch.

He was remanded in custody after a second brief appearance at the district court about 2.15pm on Thursday. His case is being transferred to the High Court.

A media application to photograph the man via video-link was refused.

Meanwhile, Housing First team leader Nicola Fleming told the NZ Herald the agency was due to meet with the deceased woman today.

Housing First supports people who have been homeless and helps them access housing quickly. 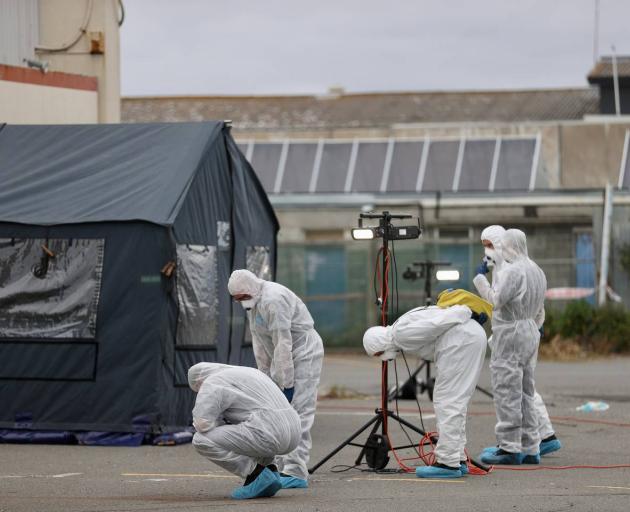 A scene examination will continue today in the vicinity of the Countdown supermarket car park off Hawke St. Photo: George Heard
It has been working with her since 2020. But Fleming said the woman disengaged in August last year.

The woman was spotted in the community about five weeks ago and two staff members visited her after receiving a tip-off on Wednesday.

"We have a lot of staff that worked with her so we shared a karakia this morning."