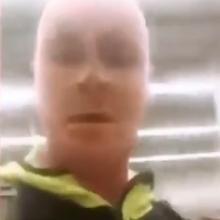 The man was shopping in Fresh Choice in Barrington, Photo: supplied
A man who filmed himself coughing and sneezing on supermarket shoppers in Christchurch has been arrested and charged.

A police spokesman said a 38-year-old man was arrested in Christchurch on Saturday night after he was seen on video online coughing at people in a supermarket.

"The man has been charged with endangering life by criminal nuisance and obstruction of a medical officer of health."

He is due to appear at Christchurch District Court on Monday.

In the video the man walks through Fresh Choice supermarket in Barrington, coughing near other customers and smiling.

"I'm sorry for this prank. It never should've happened, the alcohol had really taken effect and I have no sensor when I get this messy," the man wrote.

"There is nothing else that I can say but apologise to everybody, and assure you all it will not happen again."

Despite wearing a shirt with Graham Hill Roofing branding, the man had never worked for the company, a spokesman said.

"We can confirm this person involved has never worked directly for Graham Hill Roofing Ltd, this person was an employee of a temping agency," the spokesman said.

"We are working with the police to get our clothing back and will assist them with any information they require in this matter."

Fresh Choice Barrington said they had reported the video to police.