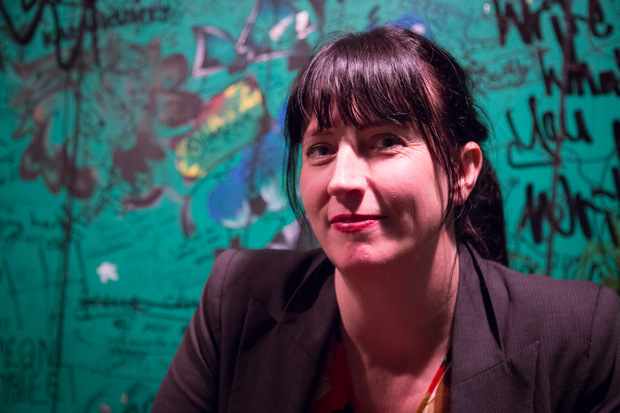 Rachael King, literary director of WORD Christchurch. Photo: Matt Bialostocki
Literary Festivals are back - but not as we knew them. The pandemic hasn't put a stop to traditionally popular writers festivals, with three in the next few weeks - in Christchurch, Nelson and Wellington. But a big line-up of international guests just can't happen, and these were often the main drawcard for book lovers.

Maybe that means local writers, who can struggle for cut- through in a festival programme, will be able to get more attention.

Assembling a programme is a long-term endeavour, with months - if not years - put into it.

And King says the pandemic has meant stripping all the plans back to basics, then rebuilding them.

"We did have an international programme with 20 international authors confirmed, so it was a bit of a panic at the beginning of lockdown when we realised that it wasn't going to go ahead.

"We thought we've got to put together an all-new New Zealand festival with a very uncertain budget - we had absolutely no idea what was going to happen in terms of our finances. But we just carried through with a lot of optimism, we started programming a smaller event - though it's actually only ended up being two-thirds the size.

"And we've managed to attract some fantastic New Zealand writers who'd be right up there in the spotlight. And in terms of internationals being a drawcard - we've seen no wain in ticket sales since we launched our programme; Our first day we had the biggest ticket sales we've ever had in a festival.

Although bypassing the international names wasn't their first choice, the new pandemic-adjusted plan has been turned out to be "a dream come true", King says.

The now always-looming threat of short notice alert level changes meant the 700 person-capacity James Hay theatre was knocked out of the Word plans.

"We had to take into account things like cancellation fees, not only from the venues but also from Ticketek, who are tied to those big venues in Christchurch, they charge a huge amount of cancellation fees. It's really ridiculous," she says.

"So we just had to make sure that we were in venues where we wouldn't be hit by those big cancellation fees. We're in The Piano, which is our largest venue and has 320 capacity, we're also in Tūranga [library] and Little Andromeda and the Christchurch Art Gallery."

"When we relaunched the programme, we set the capacities at level 2 levels, so that's 100 in The Piano, but a lot less in the smaller venues, to allow social distancing."