Next pandemic could be engineered by terrorists - former Canterbury University student 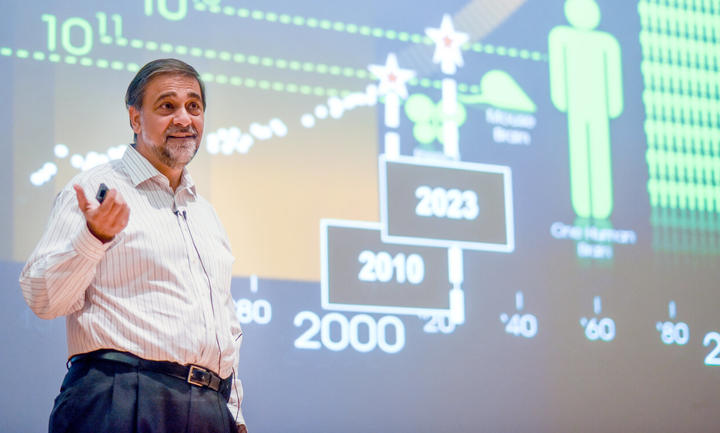 Vivek Wadhwa is a distinguished fellow at the Harvard Law School and an adjunct professor at Carnegie Mellon's School of Engineering. Photo: Becky Kirkland / NC State University / RNZ
The next major pandemic could be inflicted by terrorists unleashing a bio-engineered virus on to the world, according to former Canterbury University student and distinguished fellow at Harvard Law School, Vivek Wadwha.

In fact, you can now go on the internet and buy a US$350 kit that lets you start editing bacteria. In an essay for Foreign Policy, Wadwha writes that it is too late to stop the spread of these global technologies.

He tells Jim Mora the threat frightens him, and that the dramatic advance of technology poses huge threats to our autonomy as well as our physical safety.

Wadhwa is a distinguished fellow and Adjunct Professor at Carnegie Mellon's School of Engineering at Silicon Valley.

He is also a distinguished fellow at the Labor and Worklife Program at Harvard Law School and author of Your Happiness Was Hacked: Why Tech Is Winning the Battle to Control Your Brain—and How to Fight Back, Driver in the Driverless Car, Innovating Women: The Changing Face of Technology and Immigrant Exodus.

He says he is satisfied Covid-19 wasn't lab designed and is a natural phenomenon, but that artificially-created viruses are now relatively easy to generate, and have the potential to be much deadlier and could profoundly affect humanity.

“It [Covid-19] hasn’t been that deadly. Even though it’s spreading all over the world, the number of fatalities are relatively low."

The next pandemic could be bio-engineered in someone’s garage using cheap and widely-available technology, he warns.

“There are many ways of doing it. For example, a few years ago researchers at the University of Alberta in Canada took strands of DNA and were able to create a virus called horse pox and the entire project cost about $100,000. They created something that could be turned into smallpox easily.

“There are only two samples of smallpox left in the world right now, one in a Russian lab and the other one in the United States. They demonstrated you could actually create smallpox for a small amount of money and it took them six months to do it.”

He says you could put different strands of viruses together using a new gene-editing technology called Crispr and turn it into something lethal, and a weaponised technology that even targets specific types of genes in specific populations.

“The scary thing is that this is possible now.”

Crispr was developed by researchers at Berkley and MIT universities, who worked out of way of replicating the body’s natural reaction to fighting viruses by using part of its DNA to defend itself.

“They essentially worked out a way of being able to reprogram a gene using the same techniques the body uses to defend itself, that’s the simplest way to describe it… In simple terms you can now go and edit the DNA of living organisms and it’s inexpensive.”

It just shows how fast technology is moving and how, under the current power structures in the world, how it can be used as a force for evil, the former Canterbury University student says.

“When I was doing my education at Canterbury University the computers I was using were deck machines. Those had the same computing powers as today’s musical greeting cards.

"We are carrying the coding of 50 super computers in our pocket today, that’s how fast things have become. Within the next two, three, four or five years this next generation of these smart phones we have will have the same computing power that a human brain has.

“I’m the optimistic here, I’m normally very positive about humanity. I don’t like writing negative articles like the one I wrote, but I fear the technology is now being used for evil before being used for good.”

He believes the post-Covid period will be the most innovative in human history, as we now have the technological ability to solve the huge problems facing society.

“By the end of the decade we’ll also have flying cars, which sounds bizarre, but the stuff out of science fiction is happening.

“We are going to have vertical farms where we can grow all the food we need. By the end of this decade energy will be almost free because the cost of solar is dropping exponentially, as is wind and battery storage technology improves.

“By 2030 we will be driving electric cars that can be bought for under $10,000 and it won’t make sense to have these fossil-fuel consuming vehicles on our roads anymore. This is all happening, so this is why I’m optimistic.”

Other tech leaders are working on space travel. Elon Musk even told him of his space age retirement aspirations.

“Elon Musk is planning to retire on Mars.”

He acknowledges that there remains a radical contingency in history and that a dystopian future is also possible. Technology change can be structured and implement to augment existing inequality and power and enhance control over society.

“The same technologies make good and evil possible. My message was, if we want to create Star Trek and get this amazing future then we got to make sure that the technology benefits everyone equally.

“We have to make sure we gain autonomy and not dependence. Self-driving cars are wonderful. I have a Telsar Model S that I drive on the highway here in Silicon Valley route 280. I put it on auto and the car drives from one exit to the other.

“So, I love it. The trouble is when I’m not allowed to drive anymore I’m going to be dependent on this self-driving car, which could be spying on me to make sure I’m allowing the rules, so we lose our autonomy.”

He says technology is moving so fast that adjusting to it is difficult.

“The problem is our brains haven’t had a software upgrade in about 10,000 years.”

He advocates for everyone having a university education, including those pursuing trades like plumbing and carpentry. Change is now the world’s only constant, he says and having the ability to learn and reinvent yourself is now an essential skill.

Entire sectors of the economy have been wiped out in the covid lockdown periods and new jobs have sprouted up from the ashes in different professions, he says.

“That’s why I believe a bachelor’s degree is a minimum,” he cautions.