Park-users upset over removal of quake rocks at Christchurch park 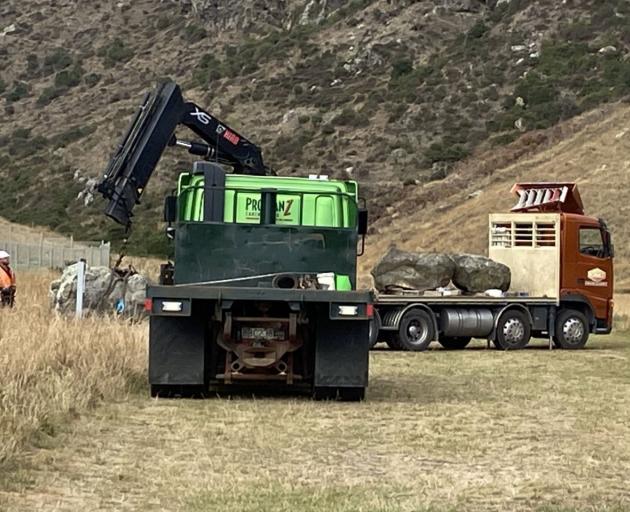 Contractors removing three rocks from Barnett Park. Photo: Amanda Rudkin
Barnett Park users are disappointed three large rocks that tumbled onto the park from Clifton Hill during the February 22, 2011 earthquake have been removed.

The rocks have been taken to the Te Pae convention centre by Ōtākaro Ltd, the Government agency responsible for anchor projects in the central city. They will be used as part of the landscaping.

“The community was not consulted over their removal, however, their presence in Barnett Park was only temporary – they were originally put in a pile here by the council  following the earthquakes,” a city council spokesperson said.

Elsa Truscott, who walks dogs in Barnett Park, said the community should have been consulted before the rocks were taken.

“They were quite a cool feature in a park that is quite empty. They were also a good memory keeper of the Christchurch earthquakes,” she said.

The rocks had become a natural playground for children to climb on.

People also liked to have their photo taken while posing on the rocks.

“The rocks are an iconic part of the community,” she said.

“They weren’t just rocks to the locals, they were part of our earthquake story and the children loved them for climbing so they had an connection too. It was great for kids to have natural resources to climb.”

Rudkin said Ava were “quite upset” when they watched the rocks being loaded onto a truck on Monday.

•Have Your Say: Tell us your views on the removal of the rocks. Email samantha.mythen@starmedia.kiwi