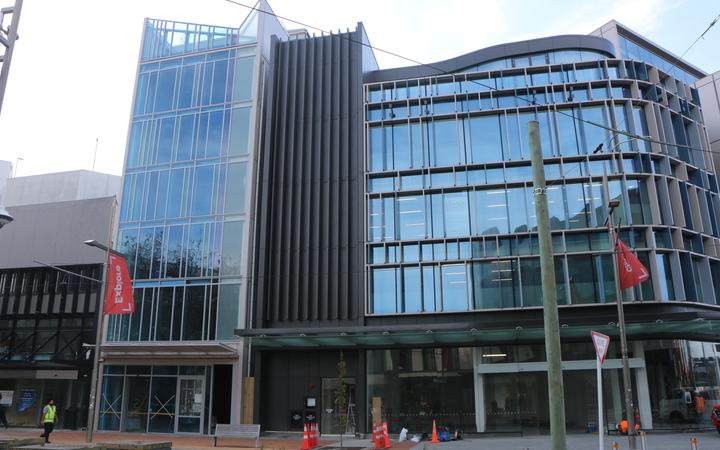 Photo: RNZ/Katie Todd
A prominent Christchurch property developer says he decided against using the firm which went on to build a substandard multi-storey building in the central city.

The building at 230 High St is in limbo after it was ruled substandard, with numerous design weaknesses which are an earthquake risk.

The building's fundamental flaws were only revealed when a junior structural engineer was walking past one night in late 2017. He looked behind the construction fence and didn't like what he saw - so his firm, Aurecon, told the Christchurch City Council.

The public only learned of the discovery when a report was leaked to RNZ.

A full two years of wrangling later - during which time the building and one next door was completed - experts have confirmed there are 10 significant weaknesses in the design, construction of columns, bracing, the calculation of seismic loads, hold-down bolts, the pile design and the stairs.

The building consent team at the city council said it was "gutted" the eight-storey design got through its checking systems.

But developer Antony Gough is unforgiving, saying the city council puts him through the mill on consents, and should've done the same with the Rockwell Group which was behind the High St building.

"Two or three years ago, they approached us, were aware that we wanted to build a car parking building in Hereford St. They said that they felt that Christchurch was being overcharged for buildings and that they could do it so much better," Mr Gough said.

He then looked into Rockwell.

Companies office records show it was set up in 2014 and 2015 by business interests originally from Korea, and an online post says it offers seismic engineering and specialised construction.

"They had a company that was only about $100 shareholding, was less than a month old and had no experience in New Zealand or Christchurch whatsoever," Mr Gough said.

"So we said: 'No thank you, Jose'. We don't think they knew enough about the local conditions.

"They were obviously quite keen to try and get in and show everyone that they could build it much simpler and easier."

RNZ has unsuccessfully made attempts to speak to Rockwell.

While all this was going on, the building was being marketed by a real estate agent last year, who says no one warned him about the flaws.

Now the public is not allowed into the block, it is not compliant with the building code and the city council, which granted the original consent, refuses to sign off on the building.

But city council head of consenting Robert Wright said there is no need for them to step in now.

"It hasn't been declared dangerous," he said.

"The definition of dangerous in our building code doesn't include in the event of an earthquake, oddly. It's not a situation that the legislation puts together."

There could also be occupied buildings elsewhere in central Christchurch which have lower quake ratings than 230 High St, he added.

However, the Ministry of Business, Innovation and Employment's ruling on 230 High St makes for grim reading: "Departed significantly" from standards, it said. "The hold-down anchor bolts ... had insufficient capacity.

"There was no reliable structural mechanism for sharing the load.

"The frame ... had insufficient capacity to resist the design loads" and so on.

It is up to the building owner to strengthen or reduce the building's height if possible, demolish it, or leave it - which might trigger a 'notice to fix' from the city council.

Mr Wright does not hold his team accountable for consenting the design, as chartered professional engineers told them it was okay.

"We're far from happy with the situation, we're gutted," he said.

"We rely on the expertise of those engineers.

But it was not. And now the city council and Engineering New Zealand are working to get a system which lets local bodies know more about engineers' competence and insurance.

It is not just 230 High St which may have a problem. The ministry's ruling said neighbouring buildings were so close-by that "further investigation" is needed into how the defective structure might twist in a quake.

The building owners on either side did not want to comment.

The peer reviewers who approved his design, Miyamoto International, refused to comment.