Quirky pieces will be on display in city for art season 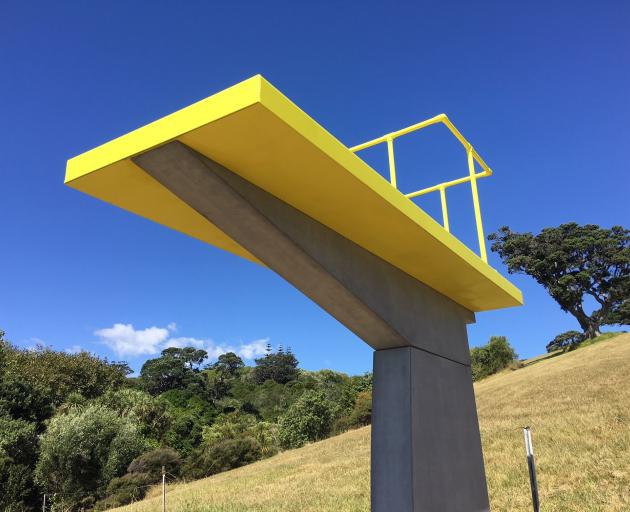 These quirky items are pieces of art which are part of SCAPE Public Arts 2019 art season that opens on Saturday and will run until November 16.

The first piece, a 16m sculpture called Vaka ‘A Hina by Tongan artist Sēmisi Fetokai Potauaine was put up on Monday and an opening ceremony for it will be held today.

The sculpture’s foundation is made up of the equivalent of 40 baths of concrete and two tonnes of reinforcement.

It is one of two permanent artworks and 12 temporary ones which will be on display during the art season.

Other works include a 2.6m diving board, called The Pool.

The bright yellow board will overlook the Otakaro Avon River at the corner of Cambridge Tce and Hereford St.

The artist behind the piece Natalie Guy said the board being stripped of its primary purpose as a launchpad “becomes a surreal, redundant and inaccessible object.”

A fluorescent cube will also be placed next to the Christchurch Casino on Victoria St.

“It draws us close but allows no access through its radiant but impenetrable skin,” said SCAPE public art managing curator Emma Bugden.

An evocative work from Susan Phillipsz, Flow my Tears, will also be on display. However, it will not be seen, only heard.

Underneath the Hamish Hay Bridge in Victoria Square, a recording of Phillipsz singing an Elizabethan lute song composed in 1596 will be played.

Phillipsz thought the James Hay Bridge, which is the oldest cast iron bridge in New Zealand, was the ideal location for the artwork.

“Sound can really act as a trigger for memory. It can bring you back to a particular place and time,” she said.

A large shipping container with the words: “Made in China” on the side has been shipped from China to Christchurch.

Made In China by celebrated Chinese contemporary artist Sui Jianguo will be placed near the corner of Oxford Tce and Worcester Boulevard on October 19.

Ms Bugden thought Christchurch was lucky to have an artwork from one of China’s most internationally celebrated artists.

“Everything comes from somewhere. Made in China is both a provocation – tapping into contemporary anxieties about buying local – and statement of fact – it’s an artwork made by a Chinese artist,” she said.

At Cuningham House in the Botanic Gardens, sculptural nets by Italian-New Zealand artist Chiara Corbelletto will be hung.

A stone’s throw away at Christ’s College, a sculpture and mobile app by Kereama Taepa will also be on display.

The artwork from Taepa which is called, A (very) brief history of Aotearoa, is both sculpture and an interactive application for iPhones that reimagines New Zealand’s past as a video game.

The artwork features a hero who bravely fights off invading enemy ships filled with missionaries, the Crown and Government – all of whom want to stage a takeover.

This season people will be able to vote for their favourite artwork and be in to win two return flights to China.

•Entries can be made on the SCAPE public art website from October 5.