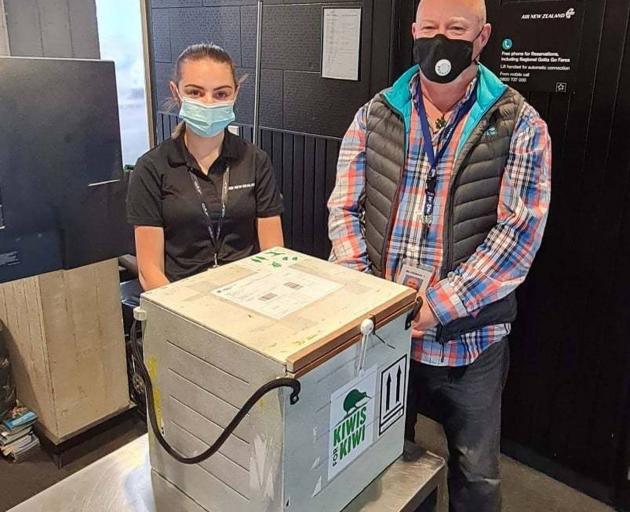 Air New Zealand and DoC were able to relocate the penguin in a Kiwi release box. Photo: Supplied, DWC
A rare Fiordland Crested penguin has survived a shark attack and a 500km trip, thanks to the quick thinking of a West Coast lodge owner and DoC relocation teams.

The bird was discovered on Tuesday 23 November by a pair of walkers on Monro Beach opposite the Lake Moeraki Wilderness Lodge. Severely injured the bird had bite wounds and was struggling to move.

Irish visitors Ben and Maureen Ryan who found the bird got in contact with DoC, who phoned lodge owner and ecologist Gerry McSweeny.

"There's penguins all around the lodge. It's a very special bird," said McSweeny.

With fewer than 7000 of the birds in the wild, mainly on New Zealand's West Coast and Fiordland, the Tawaki or Crested Penguin is the third rarest in the world. "Every bird counts."

Human intervention was called for to try and save the penguin.

The main danger was not from injury but from overheating, he said. 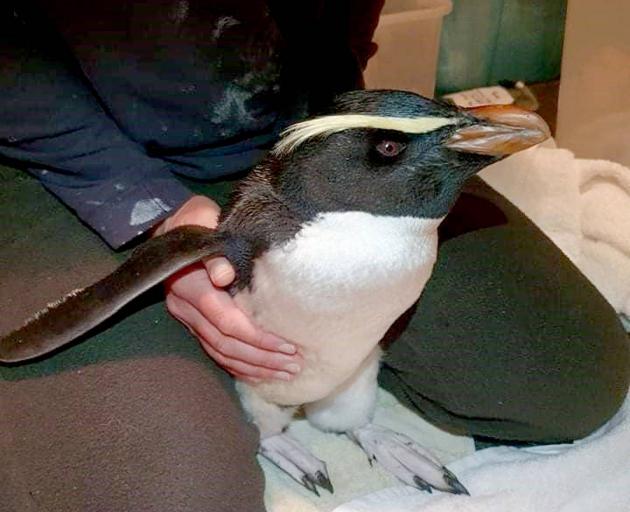 The Penguin is expected to make a full recovery. Photo: Christchurch Animal Hospital, Supplied
Sheltering the Tawaki, it was determined that the bird had a fighting chance of survival. So, DoC asked for the bird to be brought in for care.

Placed in a Wine box for safe transit, the ailing bird was driven to Fox Glacier where it was stabilised.

"When I picked it up off the beach I gave it a 50:50 chance of survival, but it's done really well," said McSweeny.

"It was able to swim with it's flippers but not its feet and was drinking like crazy."

The next day the animal was flown from Hokitika to Christchurch by a relocation team on an Air New Zealand flight, where it was operated on by the Christchurch Wildlife Hospital.

"He's doing very well now," said vet Pauline Howard. "When he arrived he was starving, he only weighed 65 per cent what he should and had a big shark bite on his back and back legs and was on kidney failure."

Working closely with DoC to treat birds through the Kea conservation trust - it is a very rare thing to have a Fiordland Crested penguin on this side of the country, said Howard.

It will be a further three weeks before he will be back to full strength and returned to the West Coast.

Christchurch and Dunedin are the only animal hospitals in the South Island capable of caring for penguins and rare birds.

According to DoC Tawaki numbers have been in decline since the 1950s, however Sharks aren't normally the biggest danger to the birds.

The Department of Conservation advises visitors to give penguins their space. Dogs should be kept away from nesting beaches.

Scruffy looking birds are normally just moulting plumage, and do not need rescued.