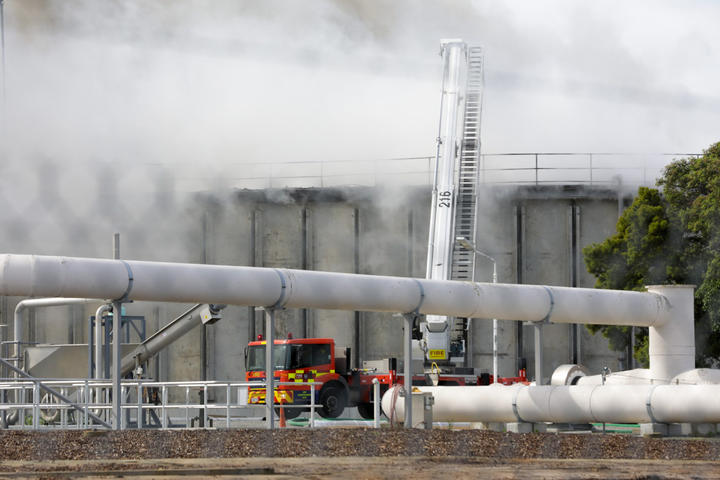 The Christchurch City Council yesterday heard tearful pleas from residents who have been tormented by the foul odour for six months.

The council's main message was there will be no quick fix.

This is bad news for the likes of Andrew Walker, who lives and works in Bromley near the wastewater plant which burnt down in November.

He said the stench has been an almost constant presence.

"You just can't get away from it. You're lying in bed asleep and next thing you wake up and it's like someone's got a bag of poo over your head and it's just awful. You can't get back to sleep because it stinks."

He said the smell was also affecting people's health.

"People are getting headaches, sore eyes, lung problems. I mean it's shit for god's sake, and shit that's been treated with chemicals and then there's also the the smell of the burnt plastic which sort of comes with it. And fibreglass from when the thing went on fire."

Walker said he was surprised there was no health warning in place or advice on how to limit exposure.

The Canterbury District Health Board issued health advice on 2 November, after the initial fire at the wastewater plant, on the impact of the smoke.

Since then, there has been no specific advice, and no one from the DHB was available to comment today.

Health Sciences at Canterbury University senior lecturer Wendy Maddocks, who is an expert in aromatherapy in patient care, said in the same way a positive smell could be therapeutic, a bad smell could have negative affects.

"It's almost like a flipped effect," she said, "and if you have been exposed to negative smells, particularly prolonged exposure it can really impact mood and a sense of well being. But also may be associated with memory and things as well. You connect with that smell or bad memory at some other point in your life."

The problem was not just affecting those in Bromley, with reports from New Brighton, Huntsbury Hill, Papanui, Sumner, and many other parts of the city.

Reports of offensive odours have been coming in to Canterbury Regional Council's Smelt-it app.

In a statement, council zone delivery lead Ruth Sarson said since the fire it had received 3363 complaints which were likely to be related to the wastewater plant, and 2026 of those in the last two months.

She said it was proactively monitoring the Bromley area twice a week.

"We continue to monitor the odour through all the available channels and work closely with CCC to ensure plans and timelines for remediation are upheld. Our intention is to ensure there is open communication and exchange of information between us and CCC. We're very conscious that this is a serious and stressful matter for residents - especially those in the Bromley community."

Christchurch City Council will announce the contractor to start removing the burnt waste material next week, and has promised fortnightly reports on how the community is coping and suggestions on assistance.