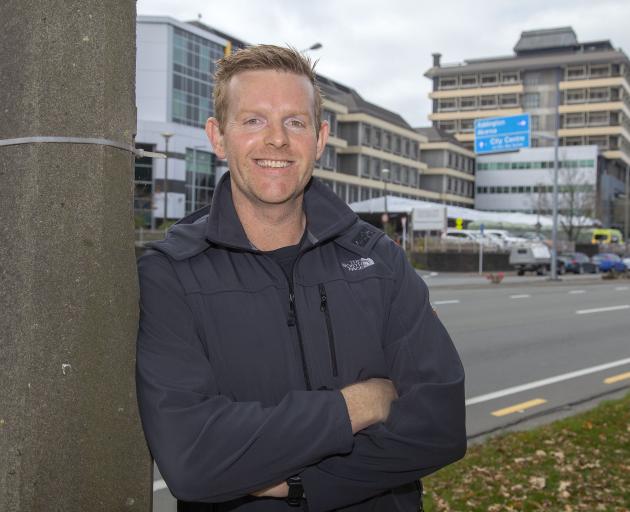 Jeremy Duggan outside Christchurch Hospital. Photo: Geoff Sloan
The desire to “lose a few pounds” after university has taken Jeremy Duggan all around the world one fast footstep at a time.

The 33-year-old Christchurch Hospital physiotherapist and social runner decided something needed to change 15 years ago.

“I’d over-indulged in the university lifestyle and things were starting to get away from me so I decided I’d set a goal to complete the Christchurch Half Marathon in 2006. 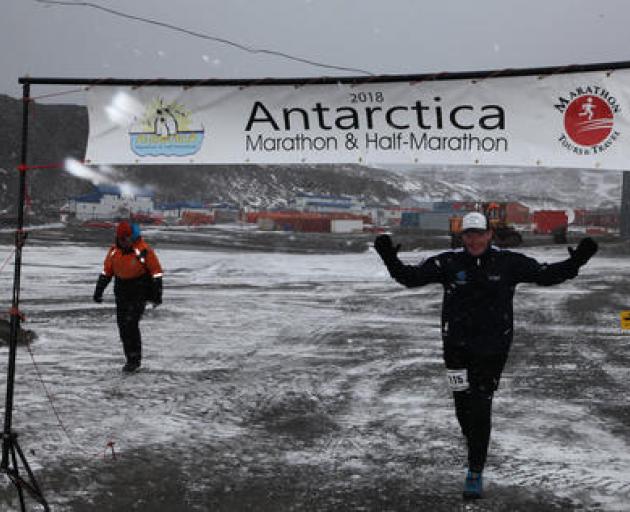 In 2018, a layered-up Jeremy Duggan completed the Antarctica Marathon on his way to trying to complete seven marathons on seven continents. Photo: Duggan Family
Duggan, who lives in Avonhead with wife Jo and daughter Eleanor, said running came to him at the right time.

“I played cricket and hockey growing up.

“Running is a personal thing, you don’t need to rely on anyone else, you just get out there and do it.

“Along with going to the gym, that was the motivation I needed,” he said.

Since 2006, he has completed full marathons on four continents, including Antarctica, and plans to tick off the remaining three, Asia, North America and Africa when time and travel allows.

“I did the London Marathon in 2013, where I dressed up as an All Black carrying a rugby ball all the way.

“Two years ago I did Antarctica in March. That was all layering,” he said.

“A couple of thermals, t-shirts, a jumper and thick socks with trail socks and away you went.

“My wife and I did six months around South America after that, and I did no training, I thought the hiking we were doing would be enough but it wasn’t.

“I did that one in Uruguay in Montevideo. I met the runners wall at the 21km halfway mark.

“Then I did Queenstown for the Australasia leg last year and hit the wall early in that one too.

“It’s not as flat as many would expect.”

Duggan said he was also eager to give back to the running community, so began volunteering with Achilles New Zealand’s Christchurch chapter.

The organisation helps people who are visually impaired or have other disabilities the chance to get active through running.

The group meets every fortnight at the Antigua Boat Sheds.

Their aim this year was to send a team to the New York Marathon in November, which is now in serious doubt due to the coronavirus outbreak.

“There’s been lots of fundraising done, so we’ll just see what happens, but it may be a 2021 goal,” said Duggan.

“They go up to Wellington for Round The Bays in February and they do other events throughout the year so it’s a great thing, and there’s some pretty good athletes among them.”

Duggan said running had taken him to many great locations and got him to a point in his life he would not have believed he could get to at the start.

“If we rewound the clock 15 years, I wouldn’t have put myself where I am now. But it’s been really good.”

He said being a physio didn’t mean he was able to resolve physical ailments any quicker than the average runner.

“I’m not always one who will ask for help in that way. I just keep going. I’m not always the best as practising what I preach.” Duggan said he enjoys his role helping people regain their fitness, movement and quality of life.

“There aren’t many glory cases. It’s a lot of sprained ankles after silliness on a night out, or helping out the older patients which I do really enjoy.”

“Running is one of the only sports you can do as an amateur athlete while travelling the world and get medals as an adult – as I say, you don’t need equipment. I’ve travelled to some amazing places for half marathons – some places that don’t attract the typical tourist like Luxembourg,

Latvia and Terni in Italy.

“I have also run under the midnight sun in Iceland where the race started at 10pm, so runners were coming through at midnight around the summer solstice.”

He said events like that he will remember for a long time.

“Runners are a community all in themselves and it’s great to be part of it.

“The good thing about running is that you can be working just as hard as someone who goes slower or faster than you, yet you’re going well for who you are.

“Running doesn’t have to be about the clock, it’s about putting one foot in front of the other and trying to complete an event.”