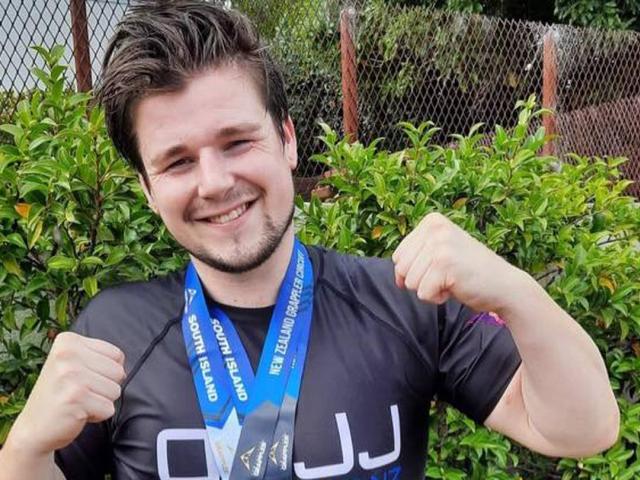 Samuel Stokes. Photo: Facebook via NZH
A Christchurch teacher has been found guilty of serious misconduct after making inappropriate and offensive comments on a podcast about students, a former girlfriend, his sex life and going to work "slightly high on drugs".

Samuel Stokes' name was initially suppressed by the New Zealand Teachers Disciplinary Tribunal but after admitting the conduct and "accepting that his behaviour was serious misconduct" his name could be reported.

But at the time of the podcast, he was employed at Hornby High School in the city teaching economics and physical education.

In November 2019 Stokes participated in an episode of a podcast called Cancelcast.

According to the tribunal decision, the creator and host of the podcast was Conor Fenelon - an "amateur comedian" and friend of Stokes.

The podcast was said to be "for the purpose of discussing current events, life events, and telling stories in a comedic light with guests within the host's friendship group".

The tribunal heard that Stokes agreed to appear on the podcast on the condition that he would remain completely anonymous and that he could "review and edit" the episode before it went live.

However, Fenelon "did not abide by that agreement" and released the podcast on a number of streaming platforms.

The episode was an hour and 38 minutes long and was online for several weeks before it was taken down.

Two members of the public complained to Hornby High School about the content and the principal made a mandatory report to the Teaching Council.

Stokes was accused of a raft of inappropriate comments including referring to a former girlfriend in a derogatory way and describing sex acts he was involved in.

He also referred to "taking drugs" and arriving at school "still slightly high on drugs".

In the episode he named two students, read out their work and allowed them to be "the subject of ridicule".

In addition, Stokes referred to a student who he described as having been in an inappropriate relationship with a teacher, in a derogatory way.

A copy of the transcript of the podcast as well as audio was provided to the tribunal.

"Mr Stokes admitted the conduct and accepted that his behaviour was serious misconduct," the tribunal decision said.

"Despite Mr Stokes' admissions, it was for the tribunal to reach its own view as to whether the conduct, if established, amounted to serious misconduct; and if so, what, if any, penalty should be imposed.

"The tribunal found the charge established. It had no difficulty concluding that the conduct was serious misconduct."

An interim non-publication order was initially put in place preventing Stokes' name and any details that would identify him from being published.

However, he did not seek permanent suppression and the tribunal said there were no grounds for that anyway.

An order was made suppressing the names of the students and the former girlfriend mentioned in the podcast.

The tribunal heard that the episode has been deleted.

They describe the sexual activity in graphic detail.

The Herald has chosen not to publish the specifics.

"Later in the podcast, Mr Stokes refers to the Teaching Council and to arriving at work still slightly high on drugs," said the tribunal decision.

Stokes said: "Teaching Council, if you're listening to this, please don't revoke my licence."

"Directly after discussing arriving at work slightly high on drugs, Mr Stokes discusses a former colleague's inappropriate relationship with a student, in a derogatory way," said the tribunal.

Stokes claimed that if a teacher was going to have a relationship with a student they should "wait until they are 16 at least".

"And then you won't go to jail, you'll just lose your teaching licence."

Stokes then went on to read out the work of two students - naming them on the podcast and speaking about an ex-girlfriend who sent him "a couple of nudes".

Stokes also referred to "being stoned" at university.

At the hearing Stokes "accepted he was naive in waiting to be invited to be involved in editing the podcast".

He said he was "naive in agreeing to the podcast at all and accepts that much of the content and discussion was not appropriate".

Stokes accepted he showed a lack of professional judgment and that it was unprofessional to provide the recount of the students' work.

He claimed he "deeply regrets using the students' names and speaking of a student's work in a derisory manner".

Stokes told the tribunal that "all comments made about drug use were completely fabricated stories, made up for the purpose of comedic dialogue".

"Mr Stokes states he has never engaged in recreational drug use and that he rarely even drinks alcohol," the tribunal said.

Stokes told the tribunal he "made a colossal mistake in participating in the podcast" and "regardless of his misguided belief of anonymity, he was wrong to even consider recording".

He was embarrassed and ashamed by his actions and had "reached the boundaries of what should and should not be made public knowledge, and let everyone down, especially the students".

"He understands his duty of care to students, and he has betrayed their trust," the tribunal said.

"He places huge emphasis on lifelong learning, and he has learned from this event. He wishes to learn from these actions and to continue teaching.

"He has matured a lot since taking part in the podcast… He has wanted to teach since he was 16 years old and having good relationships with his students was very important to him.

"Not a day goes by that he does not regret his involvement in the podcast, and how he talked about learners.

"His actions 'completely contradicted' his own values."

The tribunal ruled that not only was Stokes' misconduct serious, it "adversely affected or was likely to affect the wellbeing of the students involved".

"Mr Stokes accepted that his conduct reflects adversely on his fitness to be a teacher," said the tribunal.

"Mr Stokes failed to protect students from harm and did not demonstrate a high standard of professional behaviour that is expected of him as a registered teacher.

"The tribunal concluded that Mr Stokes' conduct may bring - and indeed, has brought - the teaching profession into disrepute.

"There can be no doubt that Mr Stokes' conduct amounted to a serious departure from the relevant professional standards that apply to every member of the teaching profession."

The tribunal said Stokes had no previous disciplinary history and noted he had "cooperated and engaged" with the disciplinary process and acknowledged his actions through a guilty plea.

It accepted he had "displayed some insight into his conduct and expressed remorse".

The tribunal was provided with a letter from Rolleston College principal Rachel Skelton who confirmed having "full knowledge of the matter " and that she had "spoken to Mr Stokes about it in depth".

Skelton told the tribunal Stokes was "well respected by his colleagues and learners" and she had "no concerns" about his professional conduct at his current school - or about him as a teacher and as a professional.

The tribunal said it was "appropriate and necessary" to impose a formal penalty on Stokes - but cancelling or suspending his teaching registration was not on the cards.

"The tribunal is satisfied that Mr Stokes has significant insight into the inappropriateness
of his conduct," it ruled.

"It considered that Mr Stokes is capable of being rehabilitated with the benefit of mentoring and further reflection… as a relatively young teacher he should be given an opportunity to further his teaching career.

"That is not to say that the tribunal did not consider his behaviour on the podcast was in any way acceptable."

The tribunal made an order censuring Stokes "as a mark of its serious disquiet about his conduct, and to uphold professional standards".

"Teachers must take care to avoid engaging in conduct outside of work… that negatively impacts on the trust and confidence students, whānau and members of the public are entitled to have in them as a teacher and as a role model and it reflects badly on the integrity and standing of the teaching profession."

The tribunal ordered that the register of teachers is be annotated to record the censure which will remain in effect for one year.

It also ordered Stokes to participate in mentoring with a mentor of his choice and provide evidence to the Tribunal within six months.

Further, Stokes is to provide a "reflective statement" about his professional obligations and for the next two years must advise any prospective or future employers of the tribunal's decision.

The tribunal ordered Stokes to pay $4250 to the CAC.