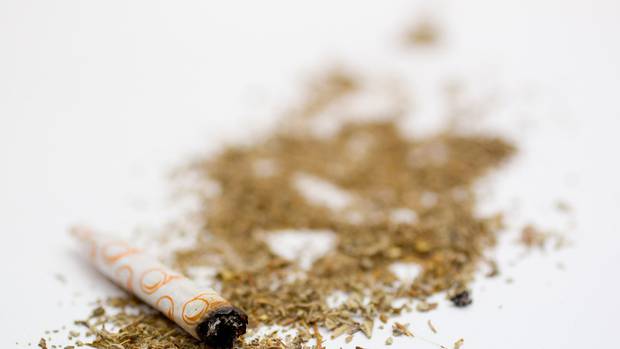 A deadly chemical compound has been detected in synthetic cannabis shipments seized across New Zealand. Photo: File
A deadly drug known for inducing zombie-like behaviour and playing a part in more than 70 Kiwi deaths has been found in the community again, putting authorities on high alert.

The chemical's effects are reported by researchers to be 75 times stronger than THC, the psychoactive compound found in cannabis.

It's meant users have often overdosed quickly from very small doses of the drug.

Of 58 cases of AMB-Fubinaca intoxication identified in Auckland, 93 per cent of victims died at the place they were using the substance, drug information group High Alert said.

However, AMB-Fubinaca appeared to then temporarily disappear from the market with the last previous detection made in New Zealand in November 2019.

That was what made the three recent detections extremely alarming, High Alert said.

"The unusually wide geographic range of these most recent detections causes concern there could be a wider re-emergence of AMB-Fubinaca in the community," it said.

"This is particularly concerning as AMB-Fubinaca has been one of the most lethal illicit substances in New Zealand in recent years.

In September last year, Chief Coroner Deborah Marshall revealed after a coronial inquiry that at least 75 people across the country had died after taking synthetic drugs between June 2017 to 2019.

AMB-Fubinaca was involved in 80 per cent of those deaths.

It also became infamous for inducing zombie-like behaviour, and fuelling an outbreak in New York in 2016 that gained it worldwide notoriety.

High Alert said the immediate effects of AMB-Fubinaca can include:

• Confusion, loss of touch with reality

"Its risk in synthetic cannabinoid products is exacerbated by unregulated black market production and manufacturers with limited or no expertise in chemistry," he said.

He said greater research was needed to understand why some Kiwis used synthetic cannabinoids.

"It is also worth noting that most people who use synthetic cannabis have reported they prefer to use natural cannabis, and consequently greater legal access to cannabis could be considered," Wilkins said.

Doug Sellman, professor of Psychiatry and Addiction Medicine at the University of Otago, also said that one of the downsides of banning natural cannabis was the emergence of highly potent and dangerous synthetic alternatives.

These were often deliberately made into highly potent varieties that meant smaller quantities could be more easily hidden and transported illegally.

"This phenomenon is exactly what happened in the United States during prohibition of alcohol (1920-1933) when very high potency alcohol produced illegally at the time for ease of transport and sale was associated with a concerning number of deaths," Sellman said.

"This was a factor in the decision by the US government to regulate alcohol rather than continue prohibition."

High Alert said there were many ways the manufacture of illegal synthetic drugs could go wrong.

"The application of synthetic cannabinoid powder can lead to varying concentrations, even within the same batch, worsening the already potent effects of AMB-Fubinaca and further increasing the likelihood of overdoses, and possibly death," it said.

Synthetic cannabinoids were also not tested in the way medicinal drugs were tested, and were not proven to be safe.

"The effects experienced can also be exacerbated by other drugs or alcohol taken, a person's mental health, or the presence of underlying medical conditions."