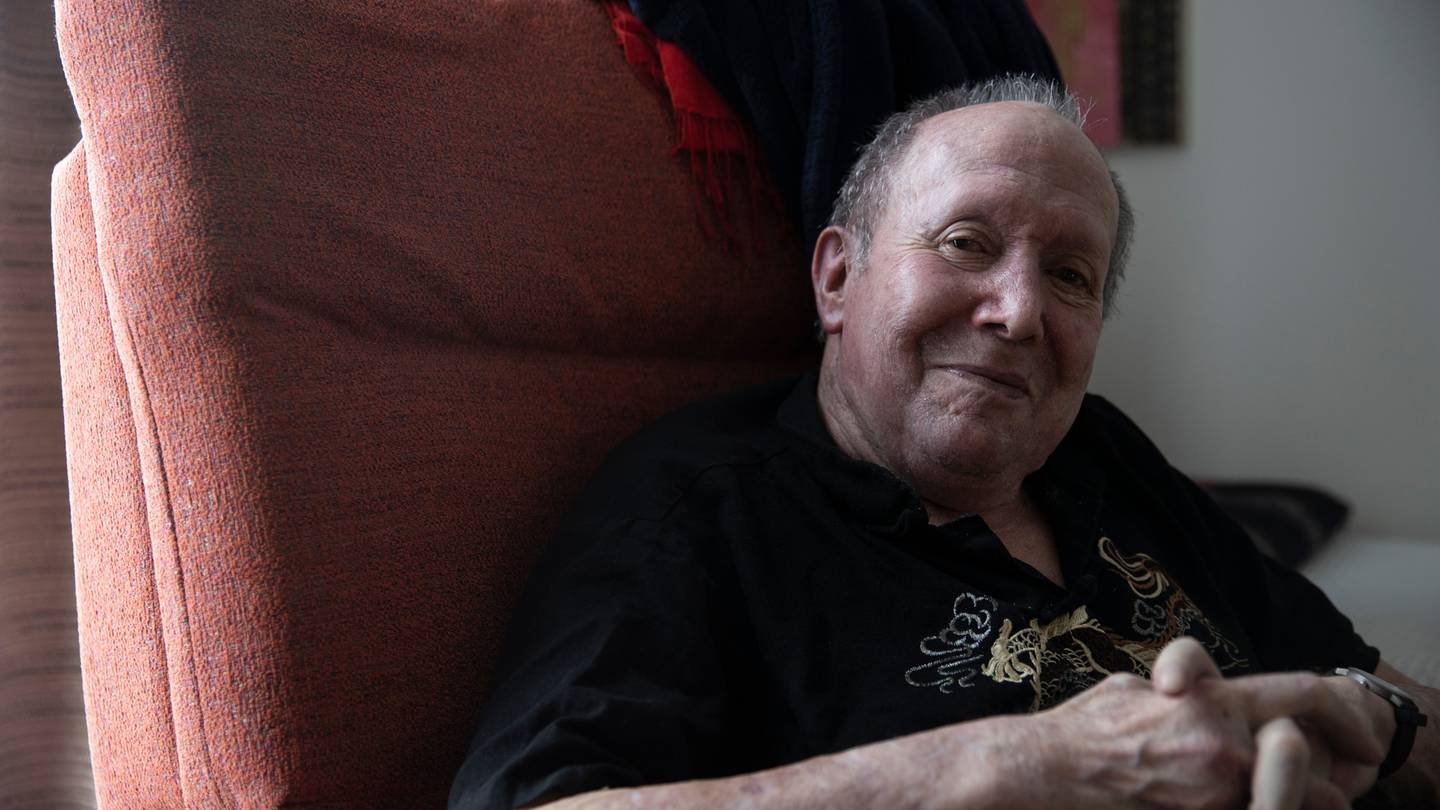 David McPhail in April this year. Photo: NZ Herald
Actor and comedian David McPhail has died at the age of 76.

McPhail, one half of the legendary duo McPhail and Gadsby, died in Christchurch overnight. He had been living at the Merivale Retirement Village.

McPhail's son Matt posted on Facebook this morning: "It is with the deepest sadness that I share with you the news that our wonderful husband, father and grandfather David McPhail died in his sleep last night.

"He leaves a great big hole in our lives but not in our hearts. A truly beautiful man."

Writer and actor David Fane wrote: "Peace light n love being sent your aigas way. He was one of my Heroes, and the first time I met him he made me feel like the most important person he had met that day."

Close friend and former comedy partner Chris McVeigh, QC, was stunned by the sudden death, describing it as "devastating".

"It's an awful cliché sometimes, but its dead right this time - he was one of nature's gentlemen and terribly gifted one at that," McVeigh said.

Actor Peter Rowley described him as having "such an influence in this country, paving a path of mirth and colour through the grey world of politics with his ground-breaking satire".

"I loved him like no other for his influence on me and what he taught me in the TV arena let alone a wonderful friendship."

Former TVNZ staffer Rob McLaughlin said his formative years in television were shaped during the McPhail and Gadsby.

"What halcyon days they were. I loved him as Muldoon. So spot on ... What a talented man and what a legacy he leaves." 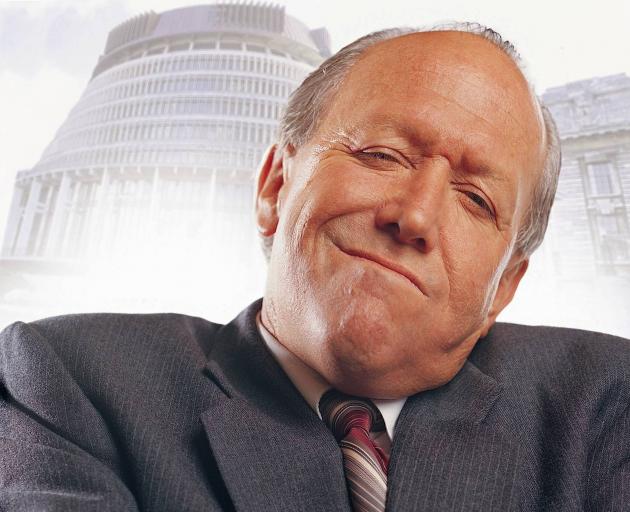 David McPhail was born in April 1945.

His father, Alexander Edward McPhail, a "devout atheist" with Scottish roots, was chairman of the New Zealand Rugby Union, and successful businessman. He owned a tannery, imported goods, and was a landlord.

McPhail enjoyed a privileged upbringing in a large brick house on Manchester St in Christchurch. He attended Cathedral Grammar School, then went on to Christchurch Boys' High School.

A brief stint at the University of Canterbury studying English was overshadowed by a rising interest in the theatre.

After "embarrassing results" during his first year, he landed a cadet reporter job at The Press newspaper.

He started at the bottom of a newsroom "large, noisy and filled with smoke" and was assigned to the court round, where he hoped to cover sensational murder trials but ended up with minor stories on shoplifters, burglars and "the curious case of a man who tried to assault his wife with an empty hot water bottle", according to his 2010 autobiography, The Years Before My Death - Memories of a Comic Life.

After several jobs on the paper, and an unhappy posting to Ashburton, McPhail resigned to become a radio reporter and then a TV journalist on a show called Town and Around. He later performed skits for a TV show called As I See It.

Meanwhile, he watched from afar as the British satire boom of the 1960s took off, with groundbreaking shows like the BBC's That Was The Week That Was.

"At the time, TVNZ was made up of the biggest collection of comedy experts in the Southern Hemisphere... bulls***!" McPhail told the Herald in April. "They didn't have the faintest idea what they were doing.

"The heads of television were more inclined to follow the wonderful trends of such comedy as On the Buses - that's what they thought we should be making.

"All I did was that I just kept pushing." 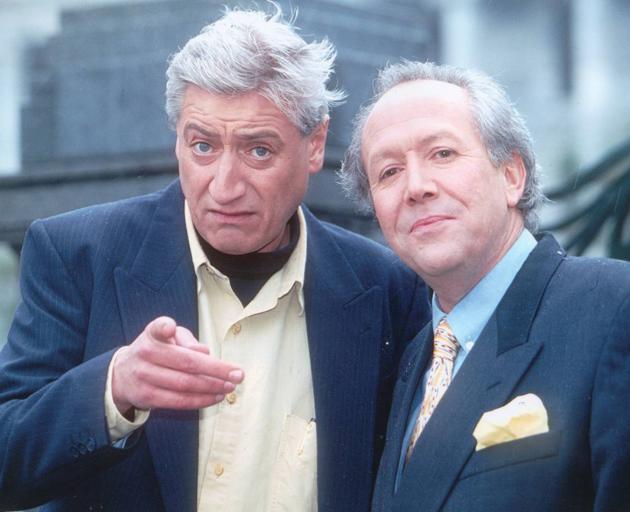 David McPhail met Jon Gasby at a student party in Dunedin and later said: "That evening would define the next 20 years of my life." Gadsby died in Christchurch in 2015. Photo: supplied

Finally, in 1977 his persistence paid off, and he was granted a pilot show, A Week of It, on a tiny budget.

Without any money for travel or pay actors, he turned to his close circle of Christchurch friends: Chris McVeigh, A.K. Grant, Ken Ellis, Bruce Ansley, and Peter Hawes.

And then there was Jon Gadsby, whom he had met at a Dunedin student party a few months previously, after friends had insisted he meet a man who was "bloody funny".

"That evening would define the next 20 years of my life," he would later reflect.

A Week of It was the first comedy show to contain impersonations of real Kiwis - including politicians.

In the opening programme, the show asked: "What is Bill Rowling [the leader of the Labour Party at the time] like in bed?"

Later, they announced they had discovered Prime Minister Robert Muldoon's family tree and showed a picture of a silver birch. "This proves Robert Muldoon is the son of a birch."

The first A Week of It also featured what would become the famous Three Jokers sketch of George, Gary and Wayne standing around a pub leaner in the Glue Pot Tavern.

A repeated cry of "Jeez, Wayne!" became a runaway catchphrase and ingrained part of the Kiwi vernacular.

The brazen sketches were often written close to the show's transmission, making them current and edgy. But it also made for some nervous times.

After first airing during the "cemetery hour" time of 10.25pm, it attracted an audience and the show took off. It won best light entertainment programme at the 1978 Feltex Television Awards.

After three seasons of A Week of It, there were seven series of skit show McPhail and Gadsby, which dominated Kiwi TV in the 1980s.

McPhail also went on to star in backwoods comedy Letter to Blanchy and one-man play Muldoon, which toured the country.