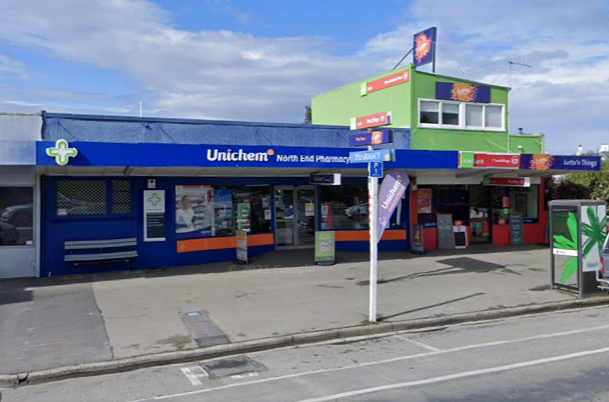 The pharmacy on Thames Highway. Photo: Google Maps
Police have arrested a man following the aggravated robbery of an Oamaru pharmacy.

The incident happened at the Unichem North End Pharmacy on Thames Highway, where police say staff were threatened with a weapon before prescription medication was taken just after 5.30pm on Friday.

The man then fled on food across the road and onto Frome St. He was wearing black clothing, a facemask and sunglasses.

Police said this afternoon they had arrested a 34-year-old from Oamaru and he was to appear in the Timaru District Court on Monday.

Staff at the pharmacy were not hurt but have been shaken by the incident, and are receiving support from Victim Support, police and their families.

"Our thoughts are with the staff who have been traumatised by this incident."

Police thanked the public for their help and appealed for any more information, as the incident happened during the busy peak-hour traffic and there were many pedestrians in the area.

"We still would like to hear from any members of the public who saw this offender in or around this pharmacy, situated at 411 Thames Highway, at about 5.30pm on Friday."