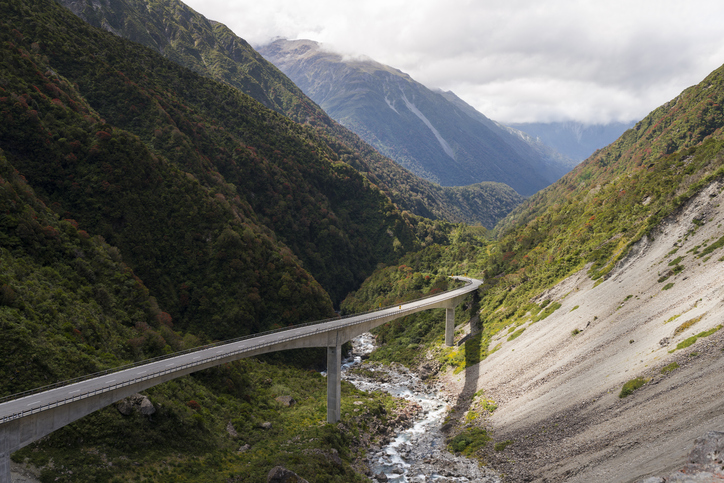 Arthur's Pass. Photo: Getty Images
Three mayors and thousands of road users are hoping to overturn a snow chain ban across Arthur's Pass, or come to a compromise with the NZ Transport Agency.

Under a new system to improve access and safety across the Southern Alps, State Highway 73 is either completely open, or closed while ice and snow is cleared.

Skifield operators, freight drivers and high country station owners are among more than 20,000 people who have signed a petition since last week asking for the rule to be revoked, while residents and business owners want the agency to provide clear evidence of the benefits at a meeting in Castle Hill last night.

Resident Peter Neale said his wife became stuck at the foot of the Southern Alps for 19 hours from 6 June, waiting for the road to reopen as black ice was cleared.

They own the Arthur's Pass Alpine Motel, and he said lengthy road closures were crippling for business.

"Our guests can't get in and the store, in particular, had no customers at all on Sunday morning. It was a beautiful sunny day and people want to get up and enjoy Arthur's Pass ... to not be able to get up, they probably just turned around and went over [the Alps] somewhere else," he said.

The Transport Agency insists the system works effectively in the Lewis Pass further north, and Desert Road in the central North Island, but Gibson said it was unfair to compare because those roads did not serve as many remote communities.

"We have many people that need to go over [to Selwyn District] for medical appointments and surgeries and also flights when the borders will be opening again, I mean, this is a long term thing," she said.

"Generally lots of our children go over there to school, for education. It's freight. It's everything really. There's a lot of people that use this road and are quite capable and they've done it for many years.

"We haven't got any statistics on fatalities or crashes. There doesn't seem to be any back up for this decision."

Smith said prospective visitors to skifields and the West Coast needed certainty they would not have to change their plans.

At last night's meeting, Transport Agency system manager Pete Connors was hoping to convince people of the safety benefits and efficiency of the new system.

He said there were already regular road closures when chains were allowed and, although this system would likely lead to more, they would be of shorter duration.

"Many people who have traversed that route over many, many years can tell pretty horrifying stories about being on the Viaduct and skating down the bottom of that, and also Porter's [Pass]," Connors said.

"I think we'll have better access, so skiiers will have better access to those skifields because instead of pulling vehicles out of harm's way when we've got the chains essential operating, we will be clearing the snow and getting the de-icer on, and making sure the road's safe," he said.

Connors admitted there should have been more clear communication about the new system before it was rolled out.

The Transport Agency was due to discuss the highway's management with the Department of Conservation, Selwyn District Council and businesses along the route in March, but the meeting had to be cancelled due to lockdown.

However, it had recently met with Grey District Council, and Connors said he was not opposed to discussing a permit system for the highway's residents to use the road in all conditions.

Peter Neale chaired last night's meeting, and crossed his fingers for a compromise with the Transport Agency.