Flood sign near Rakaia Gorge. Photo: RNZ
A farmer in the Canterbury high country still cleaning up after last month's flood is worried the bridge which connects them to the rest of the world could be washed away.

A four-wheel-drive track has since been cut on the road but a bridge near Redcliffs station is still surrounded by shingle.

Station farmer Ross Bowmar said he was still using a generator for power and had five kilometres of fencing to repair, but the bridge was his main concern.

"Probably the biggest concern we have with the road is the bridge that you will have seen on the news it's our main access way from the house across to the farm on the on Double Hill Run Road but it has shingle towering over it."

Another heavy rain and the bridge would be gone, he said.

"We've heard anecdotally that the council don't want to do anything and they want to leave the shingle towering over the bridge, given the bridge has been estimated to be worth about $5 million, I would have thought digging it out for much cheaper would be a better investment that loosing the bridge."

Following the flood, the farms up the road had to use helicopters to fly in food and supplies.

Farmers up the road were used to being isolated but the road access was vital - something he had appreciated in the last week, Bowmar said.

"I've got two kids at home ones four and the other is five months and of all things they contracted the RSV virus that's going around - so we had a couple of nights in hospital earlier in the week with the youngest one so yeah it's pretty stressful.

Bowmar said he understood the council had a big job fixing roads across the district but it would be good to get an idea of when or if the problem would be looked at.

RNZ contacted the Ashburton District Council about the bridge but is yet to get a response. 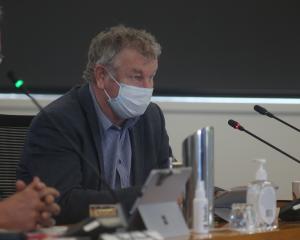