Deadly gang tensions: 'Only a matter of time before member of public is shot'

Escalating gun violence threatens to claim the lives of innocent people caught in the cross hairs of armed criminals, warns the police association.

As gang tensions rise in Canterbury following a recent double shooting of two in Kaiapoi - one a son of the local Mongrel Mob leader - and the murder of Head Hunters associate Kane Wayman, the body that represents police says the situation is reaching a dangerous flash point.

"It's certainly a burst of activity that we really just don't need and could do without. The reality is it's just a continuation of what we saw last year and it's been building up for several years," said association president Chris Cahill.

"These gang members are arming themselves and they're so much more willing to use those firearms either to commit offences against each other and against police.

"The big concern for me is police are fair game as well and it's only a matter of time that the public are as well."

Cahill said there was growing concern among frontline staff day-to-day duties, particularly traffic stops, were delivering some of the most dangerous situations on the beat. 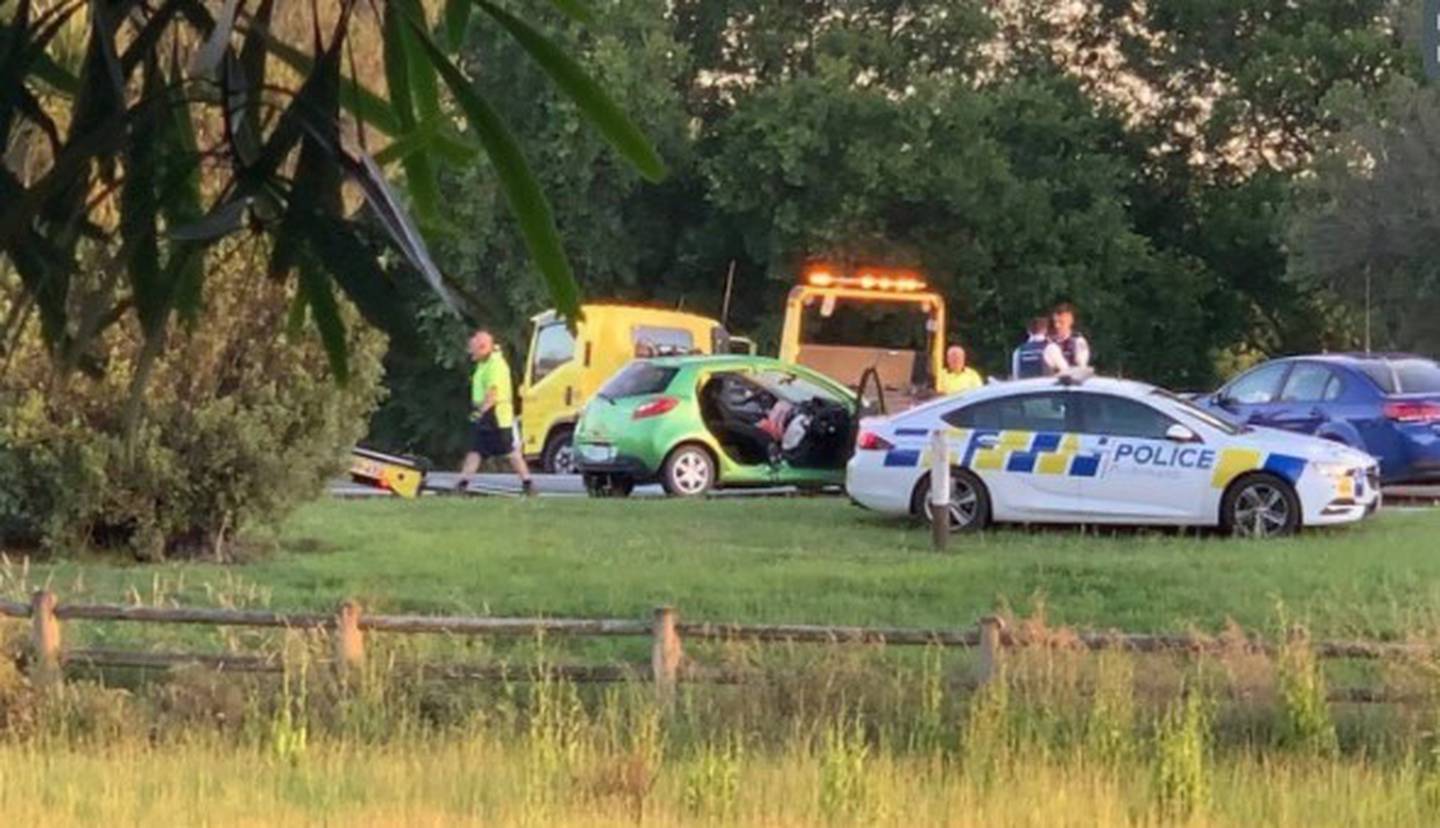 A wrecked car surrounded by emergency vehicles after a dramatic police incident in Feilding yesterday. Photo: Supplied
In the past two days police officers had been forced to take evasive action after being allegedly shot at by drivers in Foxton and Rotorua.

"Last year that was really brought home with the death of Matthew Hunt which was a routine traffic stop. They're feeling very worried and concerned the chances of someone presenting a firearm at them seems to be increasing all the time," said Cahill.

While police didn't want to be armed, there was a general feeling they needed to be because they didn't know who they would be prepared to fire a weapon at them, he said.

The association was working with police on a new frontline safety improvement programme to address safety concerns.

While the armed response teams weren't popular with the public, they were favoured by police because they believed they had more experience readily available to attend firearm incidents, said Cahill.

Options being explored lay somewhere between general arming and better access to firearms.

"We think it needs to be worked through what is a suitable replacement and what is another model that allows officers to have the protection they now need. What the public is clearly seeing is nearly on a daily basis firearms are being presented."

In the meantime Cahill called for firearm reform to continue, urging the Government to press ahead with a register to track guns in the community.

"I'm aware of registered firearms owners that have been supplying firearms to criminals. That would be a lot harder to do if that owner's firearms were registered."

"The recent double shooting in Christchurch involving gang members is yet another sad example of firearm violence in New Zealand, which should not be tolerated," Brown said.

"Gangs are continuing to live up to their violent reputation. Their use of guns in public has become far too common.

"We cannot wait until an innocent member of the public gets caught in the crossfire. The Government needs to address the increasing use of firearms by gangs immediately."

He wanted to see a law change that allowed police to issue violent gang members with special orders preventing them from holding a firearm licence or being in the presence of a firearm.

It comes as police investigate a number of episodes of gun violence across the country in recent days.

It includes a man who turned up at an Auckland medical centre yesterday with a gunshot wound and another seen with a gun in the Ōtara Mall.

In Rotorua a young person allegedly pointed a gun at police officers then stole their patrol car before crashing it on Sunday evening.

Yesterday evening 30-year-old man took at least two shots at police after a crime spree that ranged across the Horowhenua and Manawatu.

It included firing at an officer, taking a second car before allegedly driving into a stationary patrol car at speed, while shooting at police.

"The fact that police were able to successfully apprehend this person without injury to the public or police staff is an absolute credit to the courage and professionalism of the staff involved," said Allan.