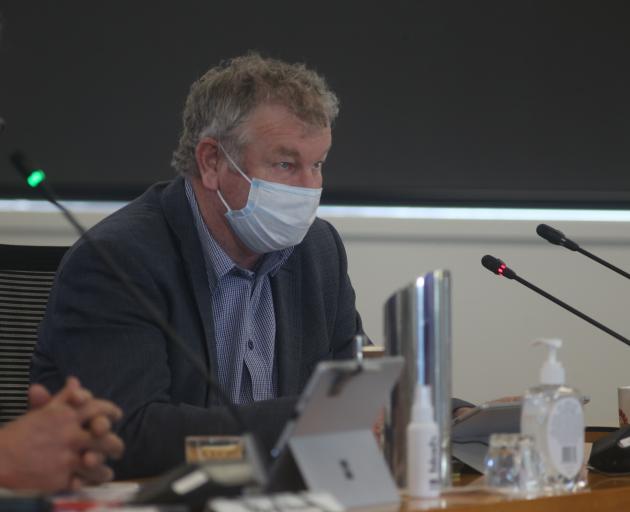 Ashburton District Mayor Neil Brown and councillors divulged the contents of NZTA's audit report in chambers on Wednesday. PHOTO: ADAM BURNS / LDR
The integrity of a report into Ashburton's reviled roads have been brought into question by councillors after the network was found to be in good nick.

The Ashburton District Council revealed details of Waka Kotahi NZ Transport Agency's (NZTA) technical audit, claiming the roads in the district were "well-managed and generally in good condition" despite an admission that the network was deterioirating.

The standard of roadside drainage in some rural areas were recorded to be the biggest obstacle facing the network, the report said.

Council's roading staff was grilled at an audit and risk committee meeting on Wednesday, with some councillors blasting the agency.

Urban councillor John Falloon suggested there was a conflict of interest due to NZTA being both the monitor and part-funder of the network.

Councillor Stuart Wilson believed the agency was exploiting the Ashburton district around maintenance expenditure which was "higher than the national average".

"If other districts can get up to 11 thousand per kilometre," he said.

"NZTA are taking us for suckers."

Council roading manager Brian Fauth highlighted that the Ashburton district was the fifth best performing network out of 72 councils, based off data around annual road deaths and other risk analysis.

NZTA approved about $46 million earlier this month leaving council with a $5 million shortfall after its low cost low risk programme was cut back.

Fauth in response to questions from Ashburton mayor Neil Brown around the risk of rural intersections suggested that it was a "behavioral thing not a road thing".

The report findings have been largley ridiculed online by residents, amid ongoing complaints on the condition of the 2600km network, fuelled by hundreds of reported potholes littered throughout the district.

Potholes were mentioned only twice in the 36-page document.

Councillor Lynette Lovett said more pressure needed to be applied on the government around road funding.

Council chief executive Hamish Riach candidly suggested that council, like many others around the country, may have reached a funding cul-de-sac due to central government's lack of money in the bank.

"There is no money to make it any different."