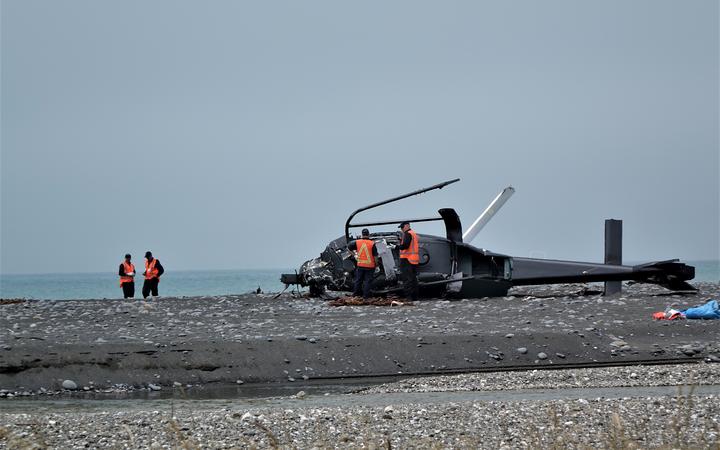 Crash inspectors at the scene on Tuesday. Photo: RNZ
The wreckage of the helicopter that crashed on a beach north of Kaikōura on Tuesday has been removed from the site.

Canterbury couple Andrew Davidson and his wife Lin Chen died in the crash while their two children, along with a schoolfriend were seriously injured.

Initial site investigations were carried out yesterday before the helicopter was removed late yesterday and taken to Wellington for further examination.

The removal followed a karakia carried out by Ngāi Tahu iwi from Kaikōura. They blessed the site and a length of the foreshore near the fatal crash.

The crash happened just before 1pm on Tuesday as the Airbus Helicopter EC120 was landing at The Store cafe and campground at Kekerengu. 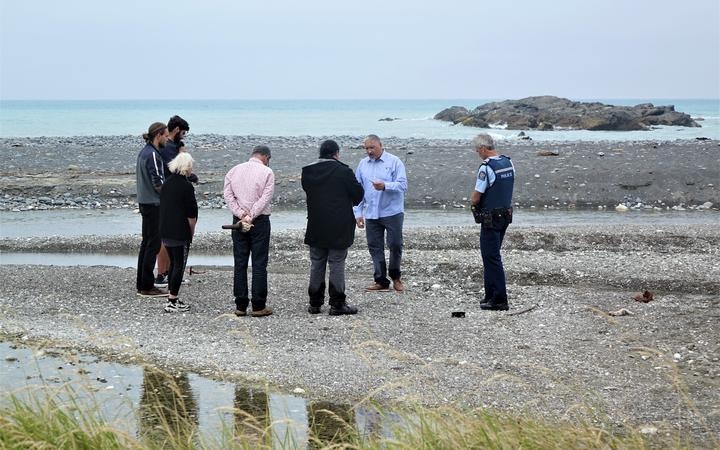 Ngāi Tahu perform a karakia at the site, Kekerengu. Photo: RNZ
The Transport Accident Investigation Commission opened an inquiry when it believed the circumstances of an accident or incident have - or were likely to have - significant implications for transport safety.

Chief investigator of accidents Harald Hendel said the investigation team had inspected the wreckage, mapped the site, and talked with witnesses.

"We have removed the wreckage from the beach, taking it for safekeeping at TAIC's technical facility in Wellington.

Hendel said the inquiry would go through a number of stages including the gathering of evidence, analysis, the preparation of a draft report and publication of a final report.

"Through all of this, we will be careful to work sensitively around the family arrangements for those who lost their lives in this tragic accident.

"This is a difficult time for all," Hendel said.

He thanked all those who had responded to the commission's call for witnesses to come forward.

The Capital and Coast DHB was unable to release an update on the children's condition. A spokesperson said their representatives have asked for privacy.