Kaikōura pāua: Public urged to gather 'for a feed, not the freezer'

Pāua caught in Kaikōura (file image). Photo: RNZ / Samantha Gee
Members of the Kaikōura community are concerned its pāua fishery is being stripped by the huge demand from the public.

The fishery reopened in December for a three-month period for the first time since the November 2016 earthquake devastated seabeds along the coastline.

Residents have reported days where there are hundreds of vehicles parked along State Highway 1 near Kaikōura, with large groups of people in the water gathering pāua.

Te Korowai O Te Tai Ō Marokura, a group that advocates for the use and protection of the region's marine environment, called an emergency meeting early this year after concerns were raised by the community about the sheer number of people gathering the shellfish.

Chair Rachel Vaughan said while it was great to see many people enjoying the fishery, the large groups that descended on the area meant, on some parts of the coast, pāua were at risk of being wiped out.

Post-quake, people no longer need to dive for pāua and the fishery can be accessed by anyone who can wade into the water

"While we haven't got any hard and fast data on how much has been taken out, it's obvious to see there are some areas that have been completely stripped of pāua.

"When looking at sustainability of the fishery, Fisheries NZ allocated a total allowable catch of 5 tonne that can be removed under recreational fishing. With a daily bag limit of five paua that is about 5000 daily bag limits." 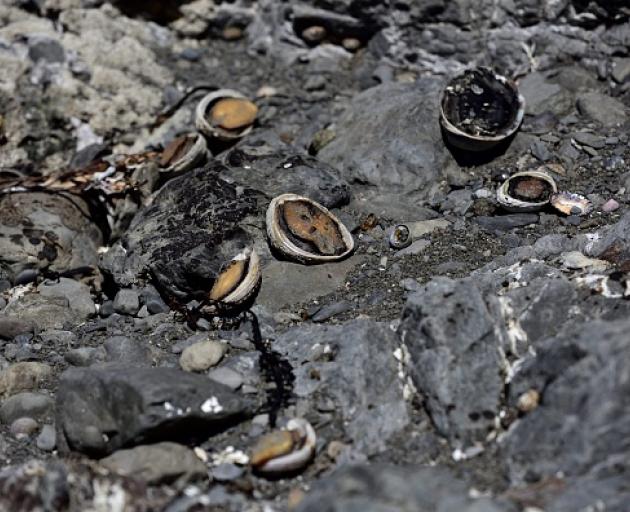 Many paua died after the 2016 quake as they were no longer covered by water. The Kaikoura coastline was lifted in some places by up to 4m, causing the seabed to be pushed above the waterline. Photo: MARTY MELVILLE/AFP via Getty Images
Vaughan said there were indications that there had been many days with over 1000 bag limits taken.

"The challenge is that there is no real time data to capture how much biomass has been removed from the fishery."

Niwa is currently undertaking a survey but the data would not be available until after the season had finished at the end of February.

While people were generally sticking to the limits, the large numbers gathering and the easy access to pāua, which could be found in very shallow water, meant the fishery was vulnerable.

Vaughan said while the group would support an early closure of the three-month season, it would impact the whole community and there was not enough time for full consultation before the scheduled closure at the end of February.

Without data to show how much pāua had been removed, it was difficult to change the regulations mid-season.

But the group was advocating for the daily catch limit to be reduced from five pāua per person, to two.

"Be respectful of our coastline, don't strip areas, because the fishery is still very vulnerable and the message really is if we want the fishery available for future generations, we need to just gather for a feed, not for the freezer."

Vaughan said the group was keen to undertake strategic community consultation with Te Rūnanga o Kaikōura and the Kaikōura Boating Club to provide a clear plan to the government to ensure long-term sustainability of the fishery.

MPI fisheries compliance regional manager Howard Reid said the season had been incredibly busy, with people travelling from the North Island to the deep south in order to collect the shellfish.

Most people were sticking to the rules, but officers were starting to see more undersized pāua among people's catch.

In December, a single diver was caught with 249 pāua in suitcases and in January, the case is still under investigation.

"There's certainly been cars parked in every single available space along the coast this summer, particularly since Christmas. It's just been very busy. There's been some large groups of people travelling long ways to have a go at the pāua."

DOC senior marine biodiversity ranger in Kaikōura Dr Jody Weir says since the pāua fishery re-opened, there had been a huge increase in poaching from the nearby Hikurangi Marine Reserve.

Many of the pāua displaced in the Kaikōura earthquake were moved into the reserve, which had become a stronghold for the region's marine biodiversity.

"What we found is that many people are sort of looking for a place to pull over along the coast to get their pāua, they see the pull over in front of the marine reserve. Apparently don't notice all of the signage, and think it's a great place to pull over and walk in and find great pāua."

While most people were doing the right thing, DOC had to increase staffing in the region over Christmas to patrol the marine reserve.

"Because this area has been so protected if it were to be damaged considerably, which is what our fear is, then we would lose that.

"We would lose our nice, big spawners that are in the nearshore, at least and we could lose that integrity of what it means to have an area that we just leave alone and we don't take from."

Te Runanga o Kaikōura kaihautū Chevelli Allen said a lot of work was done in order to reopen the fisher and it was always going to be the case that some people took more than they needed.

He said ultimately, future decisions on the pāua fishery at Kaikōura came down to the people and how they treated the resource.

Allen said if the environment had been pillaged, as was being talked about in the community, it would become clear in the monitoring data.

The marine environment was extensively surveyed before the season opened and will be assessed again after the season ends in February.